Many are sure to disagree but it’s little wonder that I love the man! From a football rebel he has become a social one and all power to him. Manchester United legend Eric Cantona is calling on people worldwide to withdraw their money from banks to put a stop to the misery of the worldwide recession caused by the banks, gaining widespread support in France, Britain and Ireland amongst others along the way. He’s convinced that a campaign for people to go to their ATM and withdraw all their savings on December 7th would spark a revolution in which people will be freed from the misery piled on them by those banks.

This is clearly a football NOT a social blog but surely, the two must become intertwined at some stage. Many of the fans who gave up their Old Trafford season tickets over the last few seasons would have done so because of financial pressures rather than a mere dislike for the Glazers. Both factors go hand in hand so the thoughts of someone as respected as the great Cantona, who was after all mentored at Manchester United by the openly socialist Sir Alex Ferguson for many of his younger years, cannot help but generate interest in what he has to say. 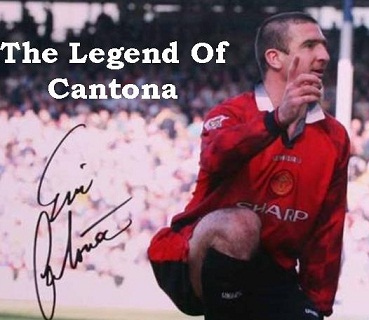 The 44 year old Frenchman told the newspaper Presse Océan in Nantes last week how the power of banking across the world has landed millions upon millions of people in unnecessary ‘misery’. “I don’t think we can be entirely happy seeing such misery around us unless you live in a pod. But then there is a chance, there is something to do. Nowadays what does it mean to be on the streets, to demonstrate? you swindle yourself. Anyway, that’s not the way any more.” The football legend said. “We don’t pick up weapons to kill people to start the revolution. The revolution is really easy to do these days. What’s the system?” he asked “the system is built on the power of the banks so it must be destroyed through the banks. This means that the 3 million people with their placards on the streets, they go to the bank and they withdraw their money and the banks collapse. 3 million, 10 million people and the banks collapse and there is no real threat, a real revolution”

“We must go to the bank” Cantona insists “in this case there would be a real revolution. It’s not complicated, instead of going on the streets and driving kilometres by car you simply go to the bank in your country and withdraw your money and if there are a lot of people withdrawing their money, the system collapses. No weapons, no blood or anything like that” he continues “it’s not complicated and in this case they will listen to us in a different way. Trade unions?” he asks “sometimes we should propose ideas to them.”

Whether you agree with him or not, whether Cantona is being overly simplistic is totally beside the point because the truth remains that he may well be right. A former Australian Prime Minister by the name of Malcolm Fraser was roundly ridiculed back in the 80’s for suggesting that it may be safer for people to stick their savings under the mattress instead of putting it in the bank. How prophetic did he prove to be thirty years on? All you have to do is ask the pension fund investors who lost much of their savings.

Cantona speaks on behalf of football fans as much as he does for the whole of world society be it in Europe, the USA, South America, Asia, Africa or anywhere else. He’s not only a Manchester United legend, the man has a conscience which must resonate with  everyone who listens to reason. Vive le Revolucion as proposed by the great man.