Mission accomplished is the best that can be said about this Manchester United drab 1-0 defeat of Glasgow Rangers at Ibrox. United and Valencia will now battle for top spot in Group C in the final game, while Rangers can take some consolation from parachuting into the Europa League ahead of Turkish champions Bursaspor.

Mission accomplished is the best that can be said about this Manchester United drab 1-0 defeat of Glasgow Rangers at Ibrox. United and Valencia will now battle for top spot in Group C in the final game while Rangers can take some consolation from parachuting into the Europa League ahead of Turkish champions Bursaspor.

Wayne Rooney made his first start since signing a lucrative new five year contract and marked the occasion with the only goal late in the game after United had been frustrated by the Scottish champions for the majority of it. Just like all his colleagues, Rooney showed little spark and imagination but in the end the points were won – after all, that’s what counts above everything else. Given the opposition United were facing (with a 5-man defence deployed AT HOME), it was not the time to bet on the Champions League to restore Rooney’s or United’s swashbuckling nature. 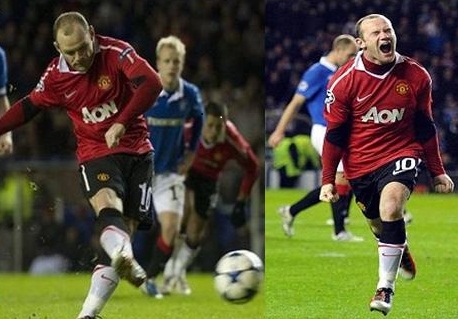 Uefa.com – Wayne Rooney converted a late penalty to send Manchester United FC through to the last 16 from UEFA Champions League Group C and leave Rangers FC facing UEFA Europa League football in the new year. Starting his first match for United since 26 September, the England striker sent goalkeeper Allan McGregor the wrong way from the spot in the 87th minute after Steven Naismith’s high foot had brought down Fabio in the box.

Sir Alex Ferguson’s side now need a point at home against fellow qualifiers Valencia CF in two weeks’ time to top the section, while Rangers are certain of finishing third ahead of their final opponents Bursaspor and entering the UEFA Europa League round of 32. Full Report 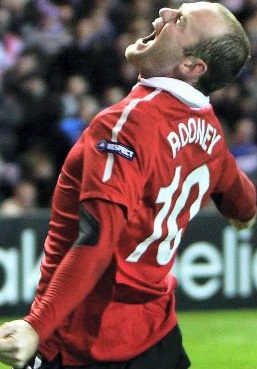 Manchester Evening News – Sir Alex Ferguson hailed Braveheart Wayne Rooney, as the England striker immediately began paying back his bumper new deal at United. Rooney’s 87th minute penalty secured a 1-0 win against Rangers as United booked their place in the knockout phase of the Champions League. It was his first goal since the controversy over his new five-year contract at Old Trafford, making him the highest paid player in the club’s history on around £160,000 a week.

And it will go a long way to winning round supporters still bitter over his threat to quit the club. Ferguson said “It took courage to take the penalty. It wasn’t an easy night, he missed a couple of chances but that’s what we expect with the rustiness in his game. I’m pleased for him.” Rooney showed nerves of steel to fire past Allan McGregor in the Ibrox cauldron after Fabio was fouled by Steven Naismith. Full Report

The Scotsman – Buttressed once again by five defenders, Rangers were breached only at the death by a Manchester United side who had to rely on a late Wayne Rooney penalty to gain a victory at Ibrox last night. Some redemption came Rooney’s way but it was tough on a Rangers side who were on course to shut out Sir Alex Ferguson’s side for a second successive time.

Walter Smith, Ferguson’s old assistant, could hold his head high as he made a farewell appearance at home in Europe’s premier competition. The Rangers manager very nearly exited with another point from United. It would have been a celebrated prize after a masterful defensive display from Smith’s side. Forced into playing Steven Davis at right back the manager’s ploy to squeeze United out of the game came unstuck at the end when Steven Naismith clumsily caught Fabio just five minutes from the end. Full Report

Written by Frank Scicluna
Replacing Scholes – Don’t Expect Any Help From Home!
Cleverley may be the right answer for United