May recalls his days at Blackburn and United

In a career which included spells at both Old Trafford and Ewood Park, David May himself will never claim to have been some sort of superstar but he was passionate about the clubs he played for and always gave 100%. It’s hard to ask for much more than that. In a light hearted interview with someone known as the ‘Plugger’ from the Daily Mirror, May reveals a number of interesting memories from his playing days.

In a career which included spells at both Old Trafford and Ewood Park, David May himself will never claim to have been some sort of superstar but he was passionate about the clubs he played for and always gave 100%. It’s hard to ask for much more than that. In a light hearted interview with someone known as the ‘Plugger’ from the Daily Mirror, May reveals a number of interesting memories from his playing days.

1) Who is the dirtiest player you’ve ever seen?

Players like Fashanu and Ferguson were always hard. You knew you were in a battle with them. You would look at the fixtures to see where they were, but you always gave as good as you got. There’s a picture – from the Mirror actually – where I’ve got hold of Dunc’s shorts, and he’s elbowing me in the throat. In terms of sneaky players, it has to be Dennis Wise. It’s just who he was. Always in your face, winding you up, and that’s part of the game. I don’t even know him, but I like him. 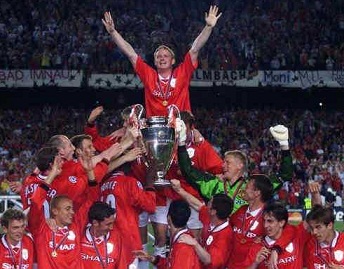 2) What team(s) do you have an irrational hatred of?
Liverpool and Leeds. Whenever we played them the fans were horrible, spitting and bricking the bus, that kind of thing. There was this one time we played Leeds away and a fan spat at me. I body-swerved, and it missed my face, but hit my blazer. Thick green stuff it was. It’s as if the guy had a got a cold on purpose. We got the last laugh, though, when we beat them 4-0 at Elland Road. Individually I’m sure they are nice guys, but when football’s involved there’s some kind of hatred. You always had an extra bounce in your step if you beat them.

3) What’s the weirdest place you’ve ever watched football?
From a hospital bed in Manchester. I was in for a hernia operation. I didn’t get any special attention though – they’re all Blues round there.

4) If you could change one thing about the game, what would it be?
I’d bring back characters, and refs with character. That’s what’s missing from the game. You used to be able to tell a referee to f-off, and they would just turn round and tell you to instead. There was more respect for them then.

5) Have you ever had a man-crush on a player?
You winding me up? I don’t bat both ways.

6) If all the current Premier League managers had a cage fight, who would be the last man standing?
Sam Allardyce, but I’d have an each-way bet on Ian Holloway as well. He looks like a feisty one. Ten years ago he could have given Sam a good fight.

7) Who is the Don of football commentators and pundits?
John Motson. Got to be. Also Clive Tyldesley, for when he said, “United score – they always score!” in the Champions League Final.

8) What’s the weirdest dream you’ve ever had about football?

City winning the league. But they haven’t, and long may it continue.

9) What’s your keepy-up record? Are you any good at football games?
About five minutes, then I get bored. And no, I’m rubbish at video games.

10) Have you ever cried because of a football match?
Only when United lost the league at West Ham. I’d just had the hernia operation, so I was sat in the pub. Someone tried to console me, but I told him where to go.

11) Have you ever lied to your partner to go to watch football?
No, it’s my job, so I never have to lie. She understands.

12) Who winds you up in football?
Arsene Wenger. He never sees anything, and cries wolf whenever his side is getting kicked. He’s a hypocrite though, because the next week his side will do the same thing, but he won’t see it. Probably a nice guy though. Also, that Mikel at Chelsea. He just comes across as a d***.

13) What were your football superstitions?
I always wanted to be in the first five to walk out. Balls to all that shorts on first and clothes stuff.

14) What’s the best goal you’ve ever scored?
Away at Boro, when we won 3-0. We needed to win the game. It wasn’t a great goal, but it was important.

15) What’s the best worst trip you’ve ever been on?
Galatasary. It was intimidating. Going to Turkey anyway is just horrible. The stadium was like a Turkish kebab shop.

16) If you had your own football team, what would their nickname be?
The Maysies All Stars!

17) What goal have you celebrated the most?
Ole Gunnar Solskjaer’s in the Champions League Final. I was leathered all night back at the hotel in Barcelona. There wasn’t a sober person there.

19) Have you ever supported a different team from the one you do now?
I was Blue as a kid. I got hate mail from some of the United fans when I first moved from Blackburn.

20) What is the king of football food?
It has to be a Chinese after a game.

Was David May underestimated by Manchester United fans?

Written by Frank Scicluna
English clubs to fail in Europe but hang on, United to win the Champions League! Che?
Football as a lottery – luck as a winning ticket