It’s a well known and medically accepted fact that the older we get, the more confusing life becomes. Well here’s someone just a couple of years younger than Sir Alex Ferguson who was totally bamboozled by two totally conflicting reports which appeared on the very same, unnamed website, within a few minutes of each other. Is it simply my advancing years or am I missing something? Decide for yourselves.

Why an English club WON’T win the Champions League – (Published at 10.25pm)

1) The Premiership Title – This year’s Premiership title is closer between more teams, both inside and outside the Champions League, than ever before. As a result, the English clubs have got more concentration on that than they ever had before. Hence the type of sides we’ve seen, particularly by Arsenal and Manchester United.

2) Squad Depth – Or, the reason for reason one. The depth of squads at Arsenal, United and Chelsea are nowhere near where they were in previous years. Players like McEachran would be nowhere near Chelsea’s bench and Hernandez would not be United’s key man, despite both their undoubted talent.

3) The Ronaldo factor – You take the rest of Real Madrid’s squad, world class. Then you add a Christiano Ronaldo to it that is averaging almost a goal a game…incredible. Not quite as incredible as he is on the new Pro Evo, where you literally can’t get the ball off him, but incredible nonetheless.

4) Spurs….ARE YOU SERIOUS? – People may say that reason two doesn’t apply to Tottenham and it doesn’t, they have the best all round squad in the Premier League with great depth. But seriously, you do realise that this is still Spurs we are on about! 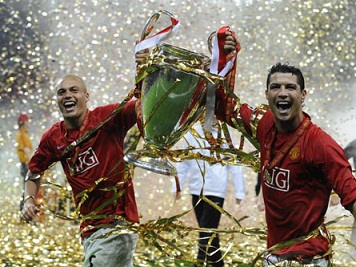 So just when I was feeling totally despondent about United’s chances, I came across this on the same website

Why Manchester United WILL win the Champions League (Published at 10.33pm)

1) They Aren’t Losing Games – Unbeaten in the league and unbelievably tight in Europe, they have that worryingly ominous air to them that means they can win games they should draw and draw games they should lose. As soon as they start playing well, look out.

2) Wayne Rooney – Still a class act despite a poor World Cup and the distractions of a new contract, Rooney can win games and carry United to European glory if he has to.  Arjen Robben took Bayern to the final last year so when Rooney hits form again he could do the same.

3) Fergie – He still wants this trophy more than ever, not even winning it in 2008 has satisfied his thirst for success.  And as he continues to unearth gems like Hernandez, he would love to leave a final legacy of success in one last Champions League.

4) They Have The Experience – From the ‘keeper and the back four, through to Scholes, Giggs, Fletcher, Carrick and Rooney they have players all over the pitch who can step up when needed and won’t be flustered by the occasion.  AC Milan started the trend of prolonging careers by using older players sparingly and when required, United could do the same.

5) – It May Be The Only Trophy They Win This Year – As the Premiership becomes even more unpredictable and sees teams like Tottenham and Manchester City put themselves forward as challengers, could the Champions League represent the best chance of silverware at Old Trafford? Fergie is surely going to retire soon and the team will need rebuilding by someone else. One last hurrah?

What do you think? Should I go and get medically assessed?