The 4-0 thumping West Ham handed to Manchester United last night was not the first, nor will it be the last of such upsets in the Carling Cup. Remember Coventry City at Old Trafford three years ago? The second tier side avoided relegation by just one point that season while United went on to win the second of three successive Premier League titles yet the champions were bundled out of the cup by two goals from little known Michael Mifsud who has barely been heard of again.

That’s the nature of a competition which is generally used by clubs like United to give their younger players a taste of first team football. They very often come up trumps but are always likely to suffer the occasional slip as was shown at Upton Park. It’s all part and parcel of their development

Old Trafford 26 September 2007 – Sir Alex Ferguson’s Manchester United fledglings flopped out of the Carling Cup after two goals by Michael Mifsud and gave Championship side Coventry City victory in their third round tie at Old Trafford. Ferguson’s decision to field a virtual reserve side backfired when his second string outfit was outplayed by the Sky Blues. 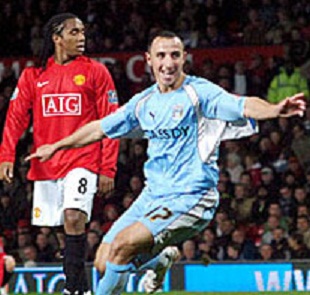 Of the players who beat Chelsea 2-0 at home in the Premiership on Sunday, only Wes Brown and Michael Carrick featured – both as second-half substitutes. The Reds were woefully weak upfront where young Chinese international Dong Fangzhou was almost an isolated figure in the first half. Coventry’s undoubted hero was pacy Maltese midfield man Mifsud. Nicknamed The Mosquito by Coventry assistant manager Tim Flowers, Misfud stung shoddy United for two goals and could have had four.

His first strike came in the 27th minute when United’s young bloods were caught cold at the back. Leon Best’s ball in from the right looked to be too long for captain Michael Doyle as he raced across the United penalty area. But right-back Phil Bardsley’s reaction to the potential danger was too slow, enabling Doyle to knock in a low cross to the far post from the left side of the box which Misfud bundled in from close range at the far post.

Misfud could have had a second goal three minutes later. Robbie Simpson crossed from the right and Misfud produced an audacious backflip ten yards out which beat United goalkeeper Tomasz Kuszczak only to hit the post. Misfud again capitalised on errors in the United defence to fire his team 2-0 ahead after 70 minutes. A long ball out of defence sent Misfud racing away down the left.

He cut in and left United defender Gerard Pique for dead as he raced into the box, exchanging passes with Jay Tabb before firing home a fierce right-foot shot from ten yards. Misfud should have had his hat-trick 12 minutes later. Doyle touched a free-kick to Stephen Hughes, whose thundering 25-yard shot was only parried by Kuszczak.

Misfud followed up with the easy job of tapping the ball in from six yards, but unbelievably he shot wide. United’s best of their few chances came seconds before Coventry’s second goal when Dong produced a superb glancing header from Nani’s left-wing cross, which was brilliantly tipped behind by Sky Blues goalkeeper Andy Marshall.

Should Ferguson be overly concerned about the heavy defeat at West Ham?