Copping a 4-0 drubbing should never be this painless! It may not exactly be a humiliation but it should still hurt so why does last night’s hammering at West Ham be seen as no more than a glitch? That long unbeaten record enjoyed by Manchester United had to come to an end eventually and when it did, the Carling Cup was always the best competition to lose it. That will be little consolation for manager Sir Alex Ferguson who hates being beaten at anything but fielding what can only be described as a second string line up against a desperately committed West Ham, the defeat should not come as that much of a shock – except for the 0-4 score line and a surprisingly lack of desire from a side managed by Ferguson.

Sir Alex has never wavered in the belief that the Carling Cup should be used for blooding his youngsters irrespective of the results but fair play to West Ham, they were deserved winners despite them also fielding a depleted side because of injuries. The defeat now leaves United free to concentrate on the Premier, Champions League and to a lesser extent the FA Cup. Can that be a blessing in disguise? After all it’s little more than a decade ago that United were knocked out of the Carling Cup 0-3 by Aston Villa at Villa Park four months after winning the Treble. You may also recall that United won the title with an 18 point margin that season.

Does that sound like I’m looking for a positive out of the Upton Park debacle? Of course I am. History has a habit of showing that small battles are often lost before large wars can be won. 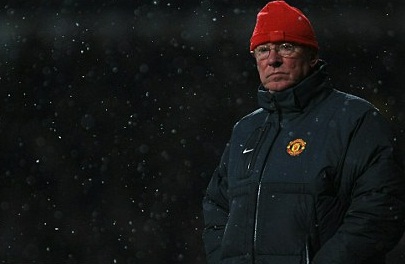 Sky Sports – Sir Alex Ferguson hopes his fledgling Manchester United players will take lessons from their surprise Carling Cup defeat to West Ham. A largely second string United side crashed out of the tournament after they were taken apart 4-0 at Upton Park on Tuesday evening by Avram Grant’s men.

And Ferguson insists the younger and less experienced members of his team need to use the experience as a learning curve. When asked whether the defeat would make them stronger, the manager told Sky Sports News: “We’ve always done well at that. Young players have come through these periods. A few years ago we lost to Coventry and they learnt a lesson that day.” Full Report

East London Advertiser – It was a West Ham United winter wonderland at snowy Upton Park where Avram Grant’s side turned the form book upside down to send the Carling Cup holders crashing out of the competition under an avalanche of goals writes STEVE BLOWERS. Jonathan Spector’s first half double put the Hammers on their way into the semi final draw before Carlton Cole struck twice after the break to emphatically send the east enders into that last four.

Grant’s men had successfully answered the joint owners early ‘Save our Season’ distress call with a 3-1 win over Wigan Athletic at the weekend but surely Gold and Sullivan could never have imagined that their bottom placed side would follow up that Mayday shout with such a spectacular showing against Sir Alex Ferguson’s table toppers. Full Report

Manchester Evening News – Jonathan Spector came back to haunt Manchester United as West Ham dumped the Reds out of the Carling Cup. Spector grabbed two first-half goals before Carlton Cole’s brace after the break completed the rout – United’s first defeat of the season. Victor Obinna had already had a goal ruled out for off side before Spector headed the opener after 22 minutes. And the former Red doubled the Hammers’ advantage quarter of an hour later when he slammed a loose ball in.

The impressive Obinna set up both of Cole’s goals after the break to leave United, who made 10 changes from the side that crushed Blackburn 7-1 at the weekend, well beaten. Full Report

What can Manchester United learn from the heavy defeat at West Ham?

6 thoughts on “Hammers defeat may be just what United needed”