Watching the thumping Barcelona inflicted on Real Madrid at the Camp Nou in the Classico last night, my mind could not help wandering what major football clubs – including Manchester United, has in store for their fans in the next 10 or 20 years. A world wide audience of half a billion viewers – read that slowly, yes, 500 million, was estimated to have watched that game on television, internet, mobile phones and whatever else modern technology can provide. Ask yourself, what else will that same technology be able to offer us in the next decade or two?

Now take a look at the economic opportunities which will become available for the owners of those clubs and you can see why people like the Glazers are desperate to hang on to their money making machines by any means possible. Clubs like United are currently locked into a collective television rights agreement which protects their smaller Premier League colleagues but does anyone really expect that deal to last forever? 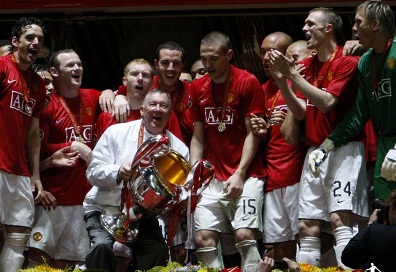 The odds are that the big clubs will go their own way irrespective of how much opposition they may face from the Premier League, Uefa or FIFA. United will join their counterparts from England, Spain, Italy, Germany and another half a dozen countries to form their own European Super League. It will be either that or be left behind – and it may happen much sooner than you think.

Can anyone stop it? Can the wind be stopped by simply blowing in it? Just think about the Real – Barcelona game. How difficult is it to imagine those 500 million viewers paying an ultra conservative average of just one pound per head to enable them to view the game on whatever electronic gadget is available to them? That’s just for one 90 minute game in 2010, multiply it over a whole season in a decade and the amount of money generated becomes almost incalculable.

An initial 14 to 18 club European Super League is not a pipe dream, it’s an absolute certainty with the only question being the timing of it. The enormous amount of money involved, the availability of modern technology and the demand from a new breed of football fan is simply too overwhelming.

The biggest obstacle could be people like me and maybe yourselves who grimly hold on to the traditional values football bring to our lives. Reality tells me that we are fighting a losing battle.

Is a European Super League for Manchester United inevitable?