Blackpool manager Ian Holloway admits to be awaiting the visit of Manchester United on Saturday with a degree of trepidation after having watched the demolition of Blackburn Rovers last weekend but don’t be fooled. The man knows exactly what he’s doing having already shown that his underrated side are capable of matching it with anyone on their day. His aim is very simple “I will be very proud, whatever the score or whatever happens, if we go out and try and do what we do and try and impose ourselves in some way on the game – I will be delighted.” he admitted.

As reported on the blackpool-mad.co.uk website, the two clubs last met at Bloomfield Road all of  36 years ago when the then Blackpool manager Harry Potts said in the program notes that “This is undoubtedly a day of days for our club with those celebrated “Red Devils” of Manchester United as Blackpool’s opponents so we regard it as a privilege to welcome our noted visitors” 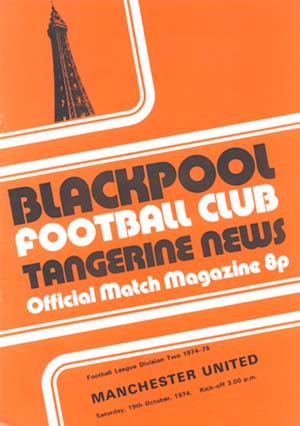 That was on October 19, 1974 and it was far from being a high profile Premier League clash as both teams where battling each other in the old second division of the Football League where United found themselves after suffering the pain of relegation the previous season.

United started that 1974/75 season well and after 13 games they had won nine, drawn three and lost only one. The 14th game of the season saw them visit Bloomfield Road to meet Blackpool who had started with only one win in their first five games but had later added three more victories so that after 12 games they had 12 points from four wins, four draws and four defeats at a time when a win was only worth two points.

Blackpool went behind after James fouled Lou Macari on the edge of the penalty area and Alex Forsyth stepped up to slam the free kick past a non existent wall and a static Wood.

Even though United piled on the pressure for the rest of the half that was the way it remained up to the break. Blackpool did however mount one or two attacks of their own, most notably when Ainscow tried a snap shot from the edge of the box only for Alex Stepney to make a great save and push the ball away for a corner.

After 60 minutes United went two up when a quick ball out of defence found Jim McCalliog. He raced away and his cross was sweetly met by Macari who swept the ball into the net. Sammy McIlroy then planted a header straight into Wood’s arms when he had all the goal to aim at before McCalliog got the goal he deserved for all his good work to make it 3-0 after 72 minutes

Overall, it was generally United who controlled the game. McCreery replaced Gerry Daly near the end but by then it was all over and the 3-0 scoreline fairly reflected the afternoon’s play.

ALEX STEPNEY (Goalkeeper). The only Londoner at United. Joined the club in September 1966 from Chelsea for a £50,000 fee and remained a regular goalkeeper. Made his name with MiIlwall and helped them to win promotion to the Third Division. At the same time he became England’s Under-23 international keeper. Transferred to Chelsea but only played one League game for them before Sir Matt Busby signed him.

ALEX FORSYTH (Full Back). Hails from Swinton in Scotland. Was signed from Partick Thistle in December 1972. A cool defender and a welcome asset to the side who settled in well. A full Scotitsh international capable of playing both full back positions as well as in midfield.

STEWART HOUSTON (Full Back). Formerly with Chelsea. Signed from Brentford in December 1973. A very big, quick and strong full back and a great asset to the team. Can also play as a central defender.

MARTIN BUCHAN (Wing Half). Born in Aberdeen, became a professional with Aberdeen in 1966 at the age of 17 and joined Manchester United in February 1972 for a large transfer fee. Made his debut in a League game against Tottenham Hotspur. A Scottish Under-23 and full international.

JIM HOLTON (Centre Half). Born in Hamilton, Lanarkshire. A strong centre half signed from Shrewsbury Town in January 1973. Settled in very well making a big impact on the defence. Gained Scottish Under 23 and full international caps towards the end of season 1972/73. Regular international during Season 1973/74 and member of Scottish World Cup Squad.

WILLY MORGAN (Outside Right). Signed from Burnley in August 1968. First Division debut against Sheffield Wednesday at Hillsborough in April 1963 aged 18. Native of Sauchle near Alloa, he gained full international honours for Scotland against Northern Ireland in Belfast. Took some time to find his best form at Old Trafford but then played some excellent games and fully justified the large fee paid for his transfer.

MICK MARTIN (Midfield). Born Dublin and signed for United from Bohemians In January 1973. Quickly came into the first team and held his place with some very good performances. Eire international who fitted in well scoring a couple of vital goals in the struggle against relegation in 1972/73. Made several appearances in the first team during 1973/74.

GERRY DALY (Inside Forward). Signed from Bohemians in April 1973 and made his first team debut against Ban in the Anglo Italian League. A very promising Eire international. Came into the first team during season 1973/74.

LOU MACARI (Forward). Born Edinburgh, signed from Glasgow Celtic in January 1973 making his debut for United against West Ham on the 20th January 1973. Full Scottish international who played in the British Championships and was a member of the Scotland squad for their games in the close season.

STUART PEARSON (Forward). Born Hull, a big strong forward signed from Hull City at the end of season 1973-74 and was expected to be a big asset to the team during season 1974-75.