Can there be anything worse than Manchester United being owned by the Glazer family? Many will say that the Americans are as bad as it can possibly get but don’t you believe it. How about being owned by a military dictator? According to a secret document leaked by whistle blowing website WikiLeaks, the club may have come close to being taken over by the leader of Burma’s military junta Nargis Than Shwe, commander in chief of the armed forces and a fan of  United. According to a cable from the US embassy in Rangoon, he was urged to mount a £634million takeover bid by his grandson.

“One well connected source reports that the grandson wanted Than Shwe to offer $1bn for Manchester United” said the June 2009 cable to Washington. “The senior general thought that sort of expenditure could look bad so he opted to create for Burma a league of its own” 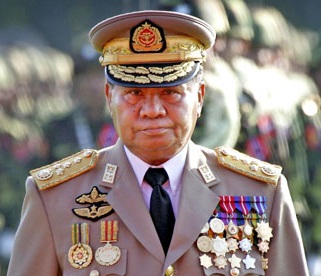 The bid proposal which did not reach the stage of an approach to the United owners is reported to have been motivated by an intention to divert attention away from Burma’s domestic problems. According to the leak, the Burmese strong man would have been able to find the funds for the bid had it gone ahead. At the time, Burma was still reeling from the impact of Cyclone Nargis which led to around 140,000 deaths in 2008.

The proposal was made prior to January 2009 when the Burmese junta was being accused of blocking vital international aid supplies after Nargis struck. Shwe reportedly concluded that making a bid for United might “look bad” at the time but the revelation that the proposal was even considered is likely to fuel criticism of the regime’s cruelty.

The senior general instead ordered the creation of a new multimillion dollar national football league at the same time as aid agencies were reporting that one year on, many survivors of the cyclone still lacked permanent housing, access to clean water and tools for fishing and agriculture.

The mooted price tag for Manchester United was exactly the same as the aid bill to cover the most urgent food, agriculture and housing for the three years after the cyclone, as estimated by international agencies including the UN. The proposal revealed that the regime, which is increasingly exploiting its oil and gas reserves, felt confident of finding such a sum. According to Forbes magazine’s valuation of the club at the time, $1bn would have been enough to acquire a 56% controlling stake.

So what can possibly come next? The Premier League already has Chelsea under the thumb of Russian oligarch Roman Abramovich, Manchester City had been owned for a short time by discredited former Thailand Prime Minister Thaksin Shinawatra and is now under the control of petro dollar supremo Sheik Mansour.

Will former US President George W Bush who once owned the Texas Rangers baseball team become the owner of an English football institution? Don’t be so naive to discount the possibility because as unlikely as it may sound, nothing can be  be ruled out in the high finance world of Premier League football!