Does the name John Curtis ring any bells with Manchester United fans? It would not surprise if many will be asking John who? The versatile defender spent five years at Old Trafford, was a member of the 1995 FA Youth Cup winning team at the age of 16 and was tipped to be a star of the future but like thousands of other hopeful youngsters, his potential was never fulfilled. After making a total of 19 senior appearances for United, Curtis moved around a number of clubs including Blackburn Rovers where he played 61 times between 2000 and 2003.

Does the name John Curtis ring any bells with Manchester United fans? It would not surprise if many will be asking John who? The versatile defender spent five years at Old Trafford, was a member of the 1995 FA Youth Cup winning team at the age of 16 and was tipped to be a star of the future but like thousands of other hopeful youngsters, his potential was never fulfilled. After making a total of 19 senior appearances for United, Curtis moved around a number of clubs including Blackburn Rovers where he played 61 times between 2000 and 2003.

Curtis now finds himself in Australia playing for Gold Coast United in the A-League. Manutd.com’s Nick Coppack caught up with him last week and asked what life was like so many thousands of miles away from where his football life all started.

What are you doing at the moment?
I’m in my living room, which is about 35 metres from the beach on the Gold Coast. I figured if I was coming all the way to Australia I may as well open my curtains and look at the Pacific Ocean each morning. 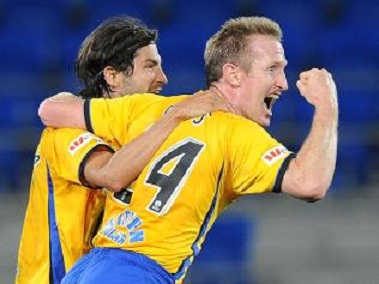 How did you end up playing for Gold Coast United in the A-League?
I had a bit of a nightmare the last couple of years in England, so I started looking for other things. To be honest, I was trying to follow in Terry Cooke’s footsteps and go to America. But the football seasons don’t tally up. A friend suggested Australia and I thought, ‘Why not?’. I came out in May, had a two-week trial and after a week the manager told me he wanted to sign me. It’s a nice part of the world so I thought I’d give it a go.

What’s the football like in Australia?
Very, very different. It’s almost like a total football style – there’s a lot of pass and move. It’s nice football to watch but it lacks the structure of English football where people stick rigidly to formations and stay in their positions. Here, everybody seems to play man-for-man and follow their man around the pitch wherever he goes. In England, if you move out of your position you’ll get exploited.

And the lifestyle?
It’s absolutely fantastic. Summer’s approaching now and we’re already starting to train earlier and earlier to avoid being out there in the middle of the day. We’ll get to the point where I’ll be finished by 11am and, theoretically, on the beach by 11:30am. It’s a great lifestyle but don’t get me wrong, it’s also a very professional set-up here at Gold Coast United.

What are your abiding memories of your time at United?
It was fantastic, a terrific experience. I was lucky enough to work with some top coaches and also some great players.

As far as league debuts go, yours was pretty routine for a defender, wasn’t it?
Yeah, it was. My Premier League debut was against Barnsley and we won 7-1, which was obviously nice. But my feet were firmly planted back on the ground when I was dropped for the next match. Sir Alex always eases you into teams as a young player.

What sort of role did Sir Alex play in your early career?
He was fantastic. I’ve heard people slag him off but he’s only ever been fantastic with me. If you give 100 per cent and you’re honest with him then you’ll get the same back from him. He’s incredibly loyal to people who are loyal to him. It’s a great attribute to have.

It can’t have been easy leaving United? Was it your decision?
It made perfect sense. I went to see the boss as I felt I was stagnating. I’d made a few first-team appearances but wasn’t really getting anywhere. Two weeks later I was sent out on loan to Barnsley, which was fantastic for me. We did really well in the Championship that season, although unfortunately we were beaten in the playoff final.

I did enough there to attract the interest of a few other clubs and Blackburn met the asking price. It was hard to leave United but I think I timed it right. I’d always said that if I wasn’t playing regularly by the time I was 21 then I’d look elsewhere for football. And that’s what I did. I don’t have any regrets.

Was Blackburn where you enjoyed your best spell?
I really enjoyed it there. In my first year we got promoted and I played virtually every game that season. It was nice to be playing every week and feel part of an 11 rather than a 22 like I was at Old Trafford.

Of course, you were still at the club when United won the Treble in 1999…
It was amazing to be involved in that. I was only a bit-part player that season and I wasn’t involved in any of the Champions League games. But to be around the squad at that time, particularly at the end of the season when you were competing for all those trophies, is something I’ll never forget. We travelled to Barcelona on Concorde, which is a good memory!

Had you given up hope, like everyone else, in the Nou Camp when the clocked ticked over to 90 minutes?
I missed both the goals! Me and Jordi Cruyff were actually on our way down to the dressing room, ready to console everybody, when the goals went in. We couldn’t believe it. Jordi knew the Nou Camp inside out so I was following him down all these corridors. At one point we stuck our heads out to see what all the noise was about and somehow we were 2-1 up! We legged it down to the pitch to join the celebrations. I didn’t see either goal until later that night.

Your current stint at Gold Coast is your 12th club other than United. Has moving so often been frustrating?
No, I think I’ve been very lucky. I’ve not only had the opportunity to work with Sir Alex but also Dave Bassett, Graeme Souness, Harry Redknapp, Sven Goran-Eriksson… giant figures in football. I’ve been incredibly fortunate. I’m big into my coaching now so I figure that if I can take bits from all those guys and combine them then I can’t go far wrong.

How long do you envisage playing?
I’ll be 32 at the end of my current contract but I’d like to keep playing for as long as possible. Maybe another year or two after that, although I don’t know if my legs will let me. I keep looking at Giggsy for inspiration!

Any plans to coach?
I’ve got my UEFA B license and I’ll probably come home this summer and get on the A license course so I’ve got that sorted before I finish playing. Then, hopefully, it won’t be too much of a transition from playing into coaching.

The life of a footballer can be fickle indeed, never knowing where it may lead. John Curtis can provide the proof of that.

Does anyone have memories of Curtis playing at Old Trafford?