Manchester United fans are desperate for their side to take all three points off Arsenal on Monday night and get back to the top of the table. Watching the action will be 26 guests who were just glad to simply get back to the top a few weeks ago. They are some of the Chilean miners who were dramatically rescued in October when, one by one, they were brought back to the surface in a capsule after spending two months buried underground.

After arriving in England this week, the men were met by Sir Bobby Charlton who welcomed the miners to Manchester. They visited Old Trafford where they will be guests of honour at the crunch Premier League meeting. The BBC reported that Sir Bobby, whose father was a miner in Northumberland, told them “You took it in your stride and the whole world was very proud of you.” 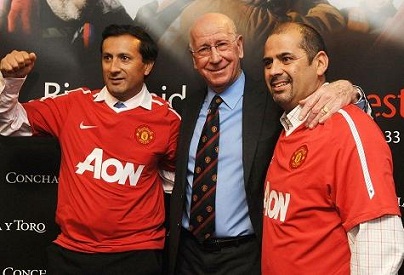 Omar Reygadas, a 56 year old bulldozer operator said “It’s an honour to be at Old Trafford. It’s the Theatre of Dreams and we have only seen it on television. We are excited to watch the match against Arsenal.” He jokingly challenged United to a game, saying “We have got enough footballers to make a team and maybe play United.”

26 of the 33 rescued miners are visiting the UK. Some of the men are believed to be fans of United and they will get VIP access to meet Sir Alex Ferguson and his players prior to the match before taking their seats in the directors box. The trip was suggested by Sir Bobby and is being organised by Chilean wine producer Concha Y Toro which is a club sponsor.

The story of the miners rescue made headlines across the globe and two of the men have said that plans for a film chronicling their ordeal in Chile are moving fast. Sir Bobby, a director at the club, suggested the visit to watch a United game when he was in their their country last autumn.

Let’s hope  Sir Alex and the miners can celebrate a good result with a glass or two of Chilean red after the game. As they know so well, there cannot be a better feeling than getting back to the top.

Is this a good PR exercise by the club or simply a waste of time?