Forget the body contortions that resulted in arguably the most valuable goal struck for Manchester United in this campaign so far. Ignore this one lung busting 90 minute display against Arsenal tonight. Can anyone dispute the fact that on his performances since the start of the season, Ji-sung Park must be the most under rated player at Old Trafford – if not the whole of the Premier League? Please do not misunderstand, nobody is claiming that ‘three lungs’ is the greatest or the most valuable, simply the most under rated. Granted, the man does not grab the headlines like other high profile stars tend to do but what more can a manager expect from any of his players?

Park was an invaluable member of a side that showed up the Gunners for what they really are. Patrice Evra may have been a little harsh in describing Arsene Wengers students as merely a “training school” but he was not that far off the mark. United won this pivotal clash far easier than the final score indicates but win it they deservedly did, and the three huge points places United where their unbeaten record demands – top of the table leading all the other Premiership pretenders with a game in hand. 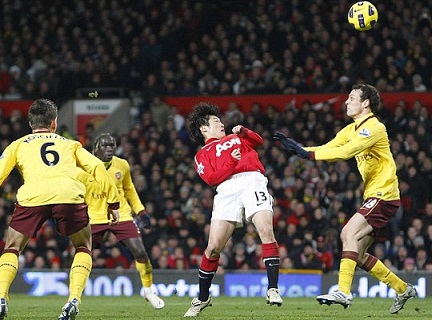 The Guardian – Manchester United became leaders of the Premier League while once again raising doubts about the capacity of Arsenal to meet the great challenges. The Gunners showed polish, but Sir Alex Ferguson’s side had an insistence that was not answered. Wayne Rooney might have extended their lead but he wasted a penalty and had a shot well-saved. Arsenal are still not quite as combative as had been suggested beforehand.

Ferguson spoke with tacit approval of the edge to the present Arsenal but red cards do not show that the men sent off are warriors. It is just as likely that the root cause of a dismissal lies in being outplayed by a superior opponent. In any case, not even the most optimistic Arsenal fan would claim that the current team has true successors at the heart of the battle to, say, Patrick Vieira or Emmanuel Petit  Full Report

Soccernet – Park Ji-sung ensured the visiting Chilean miners were able to celebrate a Manchester United victory over Arsenal on their momentous visit to Old Trafford. David Beckham was also in a star studded directors’ box to see the Red Devils secure a triumph that maintains their unbeaten record. Far more importantly, it sends them two points clear of the chasing pack, with a match in hand.

It should have been more. United wasted countless chances, the best of which being a penalty from Wayne Rooney 17 minutes from time that he ballooned over the bar. For Arsenal, the sorry statistic of a fifth reverse concealed a desperately disappointing performance which did not get that much better even after Arsene Wenger had thrown his star man Cesc Fabregas on in a last desperate bid to secure a share of the spoils. Full Report

manutd.com – United returned to the top of the table in a game that entertained without a raft of goalscoring chances at Old Trafford. Ji-sung Park struck the game’s only goal in a first half the Reds dominated to clinch a 1-0 win, while Sir Alex Ferguson’s men could even afford a missed Wayne Rooney penalty in the second half after a sustained period of Arsenal pressure. While the visitors boasted their fair share of time on the ball, United always looked the more capable of doing something with it.

Sir Alex couldn’t have been much happier with the players at his disposal. Paul Scholes failed to overcome a groin strain in time to make the game, but Michael Carrick and Anderson are arguably United’s form midfield pairing, while Darren Fletcher provides energy and purpose. While Scholes’ ball retention would be missed, the speed this game was played at perhaps demanded young lungs. Full Report

Are these the most important three points so far this season for United?