Veteran journalist David Miller has been writing football for over half a century, became sports editor of the Times of London and a columnist for the Daily Express. He has also been awarded the famous Jules Rimet Centenary Award in 2004 given to journalists who have covered 11 or more World Cups. Miller has now revealed just how close Manchester United came to replacing Sir Alex Ferguson in the winter of 1989 but that sensational story which could have changed football history was never published. Miller goes on to explain what happened in this Daily Express story twenty years later.

“Sir Alex Ferguson has just surpassed Sir Matt Busby’s longevity as manager of Manchester United yet, even he remains unaware of just how close he came to dismissal during the 1989-90 winter of discontent. So close, his replacement was identified. Dutch coach Leo Beenhakker (pictured above) was secretly discussed as a successor by chairman Martin Edwards, as United tottered towards relegation in Ferguson’s fourth season. 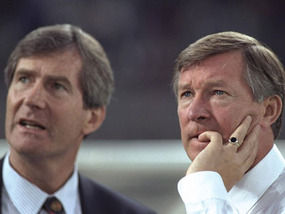 It had been bad enough the year before when league attendances slumped to 36,000, some 20 per cent down on the reign of Ron Atkinson – the last league title of 1967 a forgotten memory. Ferguson had recognised the need to clear out the Old Trafford drinking class dressing room regime. With the release of transfer funds by Edwards, Ferguson spent £7 million on Neil Webb, Michael Phelan, Gary Pallister, Paul Ince and Danny Wallace. And still the team stumbled.

A 5-1 defeat by Manchester City was the pits. Ferguson, driven by loyalty to the club but as tempestuous as Busby had been calm said “Every time somebody looked at me in the street, I felt I’d betrayed that man.” Troubles deepened with defeats by moderate Crystal Palace, then Tottenham and Aston Villa. Ferguson’s end seemed nigh when the FA Cup third round draw pitted them against Brian Clough’s Forest.

As the chief correspondent of  The Times, I knew nerves were unsteady in the boardroom. Beenhakker, renowned coach with Ajax, Feyenoord and Real Madrid and at different times Saudi Arabia, Holland, Trinidad and Poland, was between appointments and available.

So it was I arranged to meet Edwards at the Post House Hotel near Haydock Racecourse – I still have the lunch receipt – to see if he was interested in Beenhakker. He was, and his response was frank. “Of course we are seriously worried” he said “we believe in Alex, yet the situation cannot be allowed to continue. On the other hand, we don’t want United to get the reputation of being a sacking club.”

Edwards continued “Beenhakker has an attractive record, but we’d better hang on for the moment.” Wilf McGuinness, Frank O’Farrell, Tommy Docherty, Dave Sexton and Atkinson had been in and out in 16 years. United’s future, and Ferguson’s, turned on three counts. Firstly, Edwards bit the bullet and told Ferguson “Your career doesn’t rest on beating Forest.” Secondly, the cup tie was won by the only goal from Mark Robins. Then Beenhakker became re engaged by Ajax.

“Martin and Matt Busby, who was then still on the board, were marvellous, they stuck by me” Ferguson would recall. United went on to finish 13th in the First Division then beat Palace in the FA Cup final in a replay.

I never wrote the story of the Haydock meeting and Ferguson went on to build the most remarkable career in British management.”

Could the first foreign manager in United’s history have been successful?