21 year old Manchester United defender Chris Smalling has raised more than a few eyebrows with his unwise comments that a belief of going through the Premier League season unbeaten is starting to creep into the side. I don’t know how Sir Alex Ferguson feels about that sort of talk as he has already dismissed such a possibility. Smalling has the 2003-04 record in his sights when Arsenal went through that campaign drawing 12 times, winning all the other 26 and collecting 90 points to win the title by a margin of eleven.

Is it a doable goal? Highly doubtful but then again nothing is impossible. Is it important? Not really, after all two drawn matches cost you four points while one defeat only means the loss of three. Yes, there are times when settling for a point may be welcome especially when it’s obtained against another title challenger but collecting more points than your rivals is what the title race is all about – whether undefeated or not. 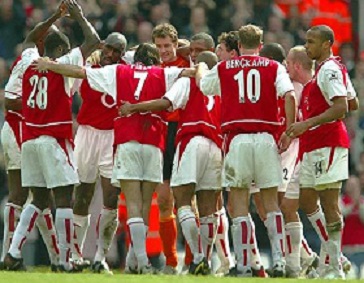 Smalling however admits that United are starting to believe they can go through the season unbeaten saying “We’re trying not to mention it, we’re happy that we’re going quietly and staying unbeaten. So many teams have lost points already this season that it would be tough to keep it going as Arsenal did. I’m not sure we’ll ever see that again but we are the only ones who can do it this season, so who knows?

The central defender continues to explain that “If we can get through Christmas still unbeaten, it will be a good sign. We haven’t really hit top form – except maybe against Blackburn – so it’s time to send out a bit of a message” he says “we take pride in the fact we are unbeaten. In the last 10 or 15 minutes of games, we put in that bit extra to make sure the run keeps going. We are getting stronger.”

That sort of talk is not only unwise it can be downright dangerous when the season has not yet even reached the half way stage. It can give opponents the additional incentive of wanting to become the first side to collect United’s scalp. What I want to see above all else is that nineteenth title coming to Old Trafford in May – whether the side remains undefeated or not.

Do you consider going through the season undefeated all that important?