Sitting pretty top of the table on Christmas Day in the closest title race for years. Two points clear and with games in hand, Sir Alex Ferguson has been there, done that more times than he can remember so his thoughts on what may lie ahead in the second half of the season are well worth listening to. “Someone asked me are you surprised to be top of the league?” he explains “I’m only surprised that people are surprised! All the top teams are dropping points, they don’t recognise how tough the league is now. My aim is to be top of the league by January 4. If we’re still top then, we’ve done well” he said.

Manchester Evening News spoke to four Manchester United stalwarts who where prepared to predict how the rest of the season may develop and they all agree – the nineteenth Premier League title is United’s for the taking. 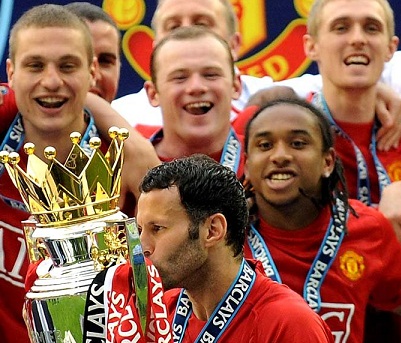 Andy Ritchie: 1977-80 “If United can keep their back five fit they’ve got a great chance of winning the title. They’re defending very well and Rio has been superb since he’s come back. Rooney needs to start scoring but keeping the back five fit is even more important. City will be there or there abouts but I don’t think they’re ready to break into the group of teams who will be challenging at the end of the season like Arsenal, Chelsea and United.”  UNITED: Champions

Mickey Thomas: 1978-81 “City will buy again next month and I expect them to be up there at the end of the season. Anything other will be a massive disappointment. United are unbeaten in the league and I think they have enough in the locker to win the title. It will be a big ask for Wigan to stay up and they need to improve their home form. Bolton have a great chance of finishing in the top six if they can avoid injuries. UNITED: Premier and Champions League winners

Gary Pallister: 1989-98 “Manchester City have done well considering the off field problems with Carlos Tevez and other players not being happy. They will be up there but the title will be just beyond them.

United have shown great resilience this year and that is what’s carried them. Wayne Rooney is looking sharper and Nemanja Vidic and Rio Ferdinand are playing well together. Roberto Martinez needs to get his Wigan players playing more consistently and showing more resilience if they are going to stay up. Owen Coyle is a contender for manager of the season. Bolton are one of four or five teams who could get into Europe. UNITED: Champions and could get to Champions League Final

Alex Stepney: 1966-78 “United have done well against the teams around them which they will need to continue. City have got the players but it’s moulding them into a team. They don’t have the experience of winning the title and they can’t lose any more home games. UNITED: No reason why they can’t win the Champions League. They will win the Premier League.

So what’s your prediction? Will title number 19 be clinched?

8 thoughts on “United greats agree: 19th title there for the taking”