Just two weeks after Manchester United’s Dimitar Berbatov failed to make the starting line up in the top of the table clash with Arsenal, he returned with a typically stylish performance. As United moved the ball around with relish he snapped up his first chance when Ryan Giggs played in Wayne Rooney and his perfect cross was headed in by the Bulgarian.

Just two weeks after Manchester United’s Dimitar Berbatov failed to make the starting line up in the top of the table clash with Arsenal, he returned with a typically stylish performance. As United moved the ball around with relish he snapped up his first chance when Ryan Giggs played in Wayne Rooney and his perfect cross was headed in by the Bulgarian.

United dominated without adding to their score and there was relief for the home fans when Berbatov’s strike on 57 minutes went in off Sunderland defender Anton Ferdinand. “The first half was the highlight” said manager Sir Alex Ferguson “some of the football was fantastic and we could have scored four or five. We were pretty economical with our performance in the second half” he told Sky Sports 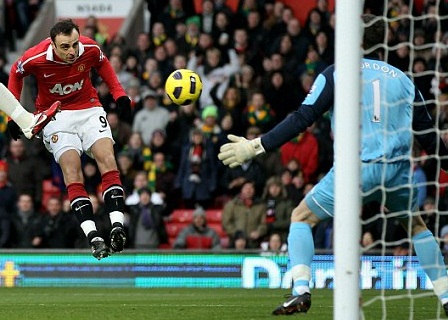 BBC Football – Manchester United are enjoying the view from the summit of the Premier League. They were far too strong for a Sunderland side who will be grateful one of the more one-sided games imaginable in the Premier League did not result in an even more harrowing experience. Sir Alex Ferguson’s men accumulated enough chances once Dimitar Berbatov had opened the scoring in the fifth minute to have easily emulated the seven goals they put past Blackburn four weeks ago– and that was just inside the opening half an hour. Instead they had to make do with only one more, Berbatov’s effort taking a large and decisive deflection off Anton Ferdinand 12 minutes into the second half.

In truth, the scoreline told a deceptive story. Anderson hit the crossbar, Berbatov jabbed a shot against the post, Sunderland’s goalkeeper Craig Gordon saved his side more times than he will care to remember and Wayne Rooney will reflect on a number of chances to score his first goal from open play for United for nine months. This was United at their exhilarating best and Sunderland, with key players missing, were outclassed from the moment Rooney chipped a cross for Berbatov to head the home side into the lead. Full Report

Sunderland Official Website – Sunderland’s unbeaten December came to an end as league leaders Manchester United picked up three Boxing Day points at Old Trafford. United had lost just one of their last 18 Boxing Day fixtures going into this game and that record never really looked like being dented after Dimitar Berbatov headed home the opening goal five minutes in.

Berbatov added a fortuitous second just before the hour to kill off a Sunderland side who started slowly but improved after swapping their 4-4-2 formation for a 4-5-1. In fairness United could have been three goals or more ahead before Sunderland boss Steve Bruce changed his system midway through the first half with the hosts attacking at will. But it was a more even game after the visiting manager’s intervention, although Berbatov’s strike effectively killed the game as a contest. Full Report

Manchester Evening News – Manchester United completed a routine victory over Sunderland to strengthen their position at the top of the Barclays Premier League. Dimitar Berbatov put the Reds into an early lead when he nodded home from Wayne Rooney’s cross. And the Bulgarian scored his 13th of the season, thanks to a deflection off Anton Ferdinand, to seal the victory.

It was almost beyond comprehension that United were not out of sight by half-time.
Not only had they scored an early goal, they had also struck the woodwork on two occasions, Wayne Rooney had twice come close to grabbing that elusive first goal in open play since March and both Berbatov and Ryan Giggs had threatened terror at every turn. Full Report