Manchester United fans have celebrated icons like Gary Neville, Paul Scholes and Ryan Giggs for two decades but spare a thought for the countless number of starry eyed kids who fall by the wayside for a variety of reasons – some through no other fault than their own. Belfast boy Gareth Macklin was one of them as Bob Cass from the MailOnline discovered. A treasured photo illustrates the ultimate schoolboy dream. A beaming 14 year old signs the paper which will open the door to a glittering football career with the world’s most famous club. There to witness the moment are two proud parents and Sir Alex Ferguson. That was 16 years ago.

Manchester United fans have celebrated icons like Gary Neville, Paul Scholes and Ryan Giggs for two decades but spare a thought for the countless number of starry eyed kids who fall by the wayside for a variety of reasons – some through no other fault than their own. Belfast boy Gareth Macklin was one of them as Bob Cass from the MailOnline discovered. A treasured photo illustrates the ultimate schoolboy dream. A beaming 14 year old signs the paper which will open the door to a glittering football career with the world’s most famous club. There to witness the moment are two proud parents and Sir Alex Ferguson. That was 16 years ago.

Today Macklin can barely bring himself to look at the framed picture which holds pride of place on the wall in elder brother Robert’s bedroom. Less than six years after it was taken, his career was finished, washed down the drain by teenage years wasted on booze, bets and birds.

For Macklin, the partying began when he quit United as a 16 year old and signed a four year contract with Newcastle United. He hit the city’s famous nightspots in the Quayside and Bigg Market and by the time the penny dropped for the former Northern Ireland youth and under-21 international left back it was too late.

When Newcastle showed him the door, Macklin went back home to Belfast resolving never to kick a ball again. Now, as he reflects on his wasted talent, Macklin offers words of warning for others who might be tempted to follow his path, current Newcastle favourite Andy Carroll among them.

‘If I could speak to Andy, I would tell him not to get involved in situations he might come to regret’ said Macklin last week. ‘He should enjoy his time in the football spotlight but he should keep his feet on the ground and maintain his priorities as a professional. I hope he never lives to regret chucking away his career as I did.’

Macklin, born in Belfast, followed a trail to Old Trafford blazed by George Best, whose own talent was cut short by his relationship with drink. By the time Macklin was 11 he was being chased by a host of top English clubs but once the local United scout knocked on his door, there was only one for him.

‘I joined United’s School of Excellence in Belfast and I’d fly over regularly to Manchester to train’ he said ‘my best friend was David Healy and there were people like Wes Brown there at the time. I signed schoolboy forms for them when I was 14. 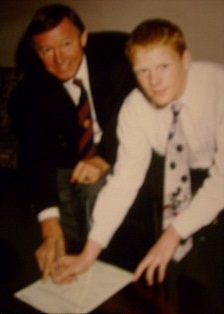 ‘I’ll never forget meeting Sir Alex Ferguson. I had my picture taken with him and my mum and dad signing for United at Old Trafford before a Middlesbrough game. United flew my mum and dad over to matches and before one game I introduced them to Roy Keane, who was another great hero of mine. Roy got sent off and my mum said she was not sure about me signing for a club which had such rough players.’

Macklin cannot explain why or when things started to go wrong for him in Manchester but his enthusiasm began to deteriorate until he decided on one particular trip back to Belfast, not to return. Not even Ferguson at his most persuasive could make him change his mind.

‘It wasn’t homesickness and nothing had happened. I couldn’t explain it then and I can’t now’ said Macklin ‘Fergie rang my house to find out why and wanted to speak to my dad. My mum said he wasn’t in but told him the bar where dad had gone for a drink. Imagine how dad felt when the Manchester United manager rang the bar and spoke to him. Dad told him about me being unhappy and that was the end of me and United.’

But, as one opportunity was scorned, another presented itself when Kenny Dalglish, then boss at Newcastle called. ‘Kenny must have remembered me from when I went to talk to Blackburn Rovers and he had heard I was available,’ said Macklin.

‘I went to Newcastle for a week, played a couple of games and enjoyed it. They put me in a little hotel that I ended up living in for the four years I was at the club. I was only 16 and couldn’t sign professional forms until I was 17 so I signed for three and bit years on my 17th birthday in August.’

Even by that time, football had begun to offer itself as a short cut to life in the fast lane. ‘Newcastle was a brilliant place to be’ said Macklin ‘I’d begun to enjoy the good life in Manchester but in Newcastle I let myself go. I had money in my pocket and plenty of booze and girls to spend it on. I was out drinking almost every night. I made friends with the locals and we partied all the time. Half the time I couldn’t even remember what I did or who I was with.’

He admits that other players behaved in a more sober fashion. ‘I remember sharing a room with Shola Ameobi on a trip to Germany’ he said ‘I was out enjoying myself until all hours and when I got back he was in his room reading his Bible.

‘My football didn’t suffer at first. I was still getting up and going training and I was  young enough and fit enough to handle it. But then my drinking and partying began to take its toll. It got to the stage when football was just a hardship. I knew I was ruining my career and I neither wanted nor could do anything to stop it. I was finishing training at 12 o’clock and by one I was in a casino.

I’d think nothing about having a grand on red or black on the roulette table. I don’t blame anybody but me. I refused to go into digs and insisted on staying at the little hotel. The only security was an old guy and he had to write down what time I went out and came back in. I used to bung him a  hundred quid and he would write down that Gareth went to the cinema at seven o’clock and came back at half-past nine. The truth I was getting back at four in the morning every day. The little chap thought it was Christmas every time I was in the hotel.

‘But it got to a stage where I couldn’t hide it. Alan Irvine and John Carver were the two guys on the coaching staff that I dealt with and in the end they were just fed up with me. When it came to renewing my contract I knew there was no chance. When they told me it was over all I said was “Thanks a million, see you later”. I left and came back to Belfast. I never stopped to think “If I pack in being an idiot I could still salvage something from my career”.

‘When I got to Ireland, it hit me what a fool I’d been and I went missing for a while. I had let everybody down, my mum and dad, Robert, my sister Jane and all the friends who believed in me. I felt suicidal. I resolved never to kick another ball. I told myself if I can’t play at the top, I don’t want to play anywhere. The only time I did was when my dad, who was a pal of the manager of Coleraine, persuaded me to play in a match against Linfield. I did it for the money, pure and simple.

‘But I was in a nightclub until four on the morning of the game. I stunk of booze when the boss came to pick me up and I kept my face away from his face to try to hide it. I can’t remember anything about the match apart from the public address announcing at the end of the game that I was man of the match. That was the last time I ever went into a football dressing room.’

It’s a sad, sad story but one that is repeated all over the football world every year. A game that can provide wealth, glory and so many wonderful memories for a few can also be heartbreaking for many thousands. Unfortunately, some cannot even be saved from themselves. Gareth Macklin is but one example!