Point at Birmingham should have been better

So were these another two points lost or a valuable one gained? It’s worth remembering that this was the fourth time that United has failed to take full points from St Andrews in their last five visits so perhaps the outcome should not be all that surprising. In such a tightly fought title race, this could be the one point that makes the difference in the final outcome. As always, my complete faith lies in Sir Alex Ferguson.

Another away game, another draw and another two points lost when they had appeared to be in the bag until Birmingham City snatched a last minute equaliser. Despite that however, Manchester United ends the year still unbeaten, top of the table with two games in hand over second placed Manchester City and here’s a little bit of history which augers well for United. No team which has entered a new year undefeated has ever failed to go on to win the title except Sheffield United way back in 1899-1900, that’s all of 110 years ago when they finished runners up to Aston Villa. On the other five occasions when Arsenal twice, Preston, Leeds and Liverpool ended the year undefeated, they were crowned Champions.

Were these another two points frittered away or a valuable one gained? It’s worth remembering that this was the fourth time that United has failed to win at St Andrews in their last five visits so perhaps the outcome should not be all that surprising. In such a tightly fought title race, this could be the one point that makes the difference in the final outcome. As always, my complete faith lies in Sir Alex Ferguson. 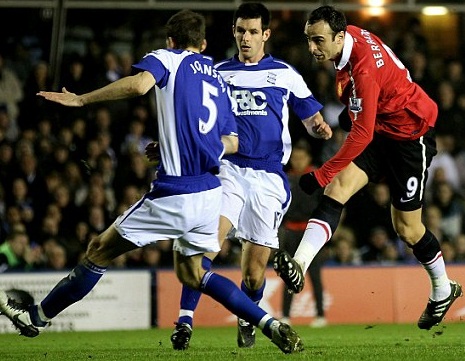 Daily Telegraph – What a compelling title race this is. Manchester United still went ahead of one City in blue but they were held by another last night. United lead the Premier League from Manchester City on goal difference, albeit with two games in hand, but they couldn’t keep Birmingham City at bay before a baying home public at St Andrew’s.

The biters were bit. So often United have plundered late goals but here it was a team assembled by Alex McLeish, one of Sir Alex Ferguson’s former charges. Leading through Dimitar Berbatov’s eighth goal in three Premier League games, United seemed to be heading towards victory when Lee Bowyer struck late on, deserved reward for his energetic endeavour all evening. United will be furious, partly because Nikola Zigic appeared to foul Rio Ferdinand in the build up.

Birmingham Mail – Manchester United are set to end 2010 on top of the Barclays Premier League despite Dimitar Berbatov’s goal being cancelled out by Birmingham midfielder Lee Bowyer at St Andrew’s. Berbatov followed his double in the Boxing Day win over Sunderland with what looked another decisive contribution to take his tally for the campaign to 15 goals.

But Bowyer, who had scored the winner against Chelsea last month, equalised late on to lift Birmingham out of the bottom three. Darren Fletcher replaced Anderson in United’s first change after 72 minutes. Birmingham defender Scott Dann was yellow carded for a late challenge on Berbatov, before Gibson was teed up by Rooney 20 yards out but sent his shot wildly off target  Full Report

Manchester Evening News – Manchester United regained top spot in the Premier League but had to settle for a point after a controversial late equaliser from Birmingham at St Andrews. In form Dimitar Berbatov opened the scoring against the stubborn home side when he started and finished a fine move after 58 minutes. But Lee Bowyer scored a 90th minute leveller despite claims for offside and handball. The point was enough to lift United back above Manchester City on goal difference. The Blues had briefly gone top after their win over Aston Villa.

Top of the pile or not, an away record that boasts only one victory in eight – at Stoke – is not the form of champions. And the fact the Reds are top will be cold comfort to Ferguson, who thought he had stamped out the defensive lapses that cost points at Fulham and Everton earlier in the campaign – not to mention so nearly at Stoke. How costly the draw will prove in the long run remains to be seen. United remain undefeated in the league – stretching that club record from the start of the season to 18 games. Full Report

Should United fans be satisfied with this point or rue the two that got away?

Written by Frank Scicluna
United cleared all the hurdles on way to the top
Who's The "Best Ever"? Who Can Really Say?