Manchester United fans have traditionally been generous in giving former players a warm welcome whenever they return to Old Trafford with their new club. Saturday afternoon will be no different when Birmingham City goalkeeper Ben Foster comes back to his former home for the first time since his £6million transfer in the summer. And why not? Foster made a total of 23 appearances for United during the five years he spent as a red but finally decided that the only way for his career to develop was to move elsewhere.

His good form at St Andrews has been recognised by England manager Fabio Capello who recalled the 27 year old keeper into his squad after the disappointment of being excluded from the 2010 World Cup squad. Foster has kept six clean sheets this season with Manchester City and Chelsea on the list of sides left frustrated by his talent. 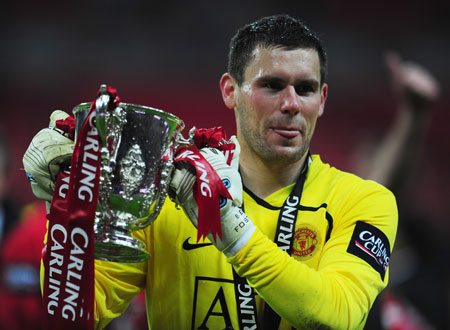 “I think I’m back to my best, I feel good and I’m enjoying my football” he said “I’m playing week in, week out and I’ve been given that chance here and it’s working. I’m loving it” he admits “I’ve never enjoyed my football more. I don’t wish I’d stuck around at all. I had a loan spell at Watford and had a great time, but now this is the best time I’ve had.”

“Yeah, I’m having more fun, that’s the huge part of football. It’s tough at Unitedg> and in training it’s very serious. I’m not saying it’s not professional at Birmingham and I don’t want to be pro, but there is more of a relaxed atmosphere here and I suppose it’s up to me to show United what they’re missing.”

Manager Alex McLeish has hailed his keeper “world class” as he backed him to bounce back from his glaring Carling Cup error against West Ham. McLeish said “Keepers are in that unfortunate world where a mistake normally leads to a goal. Edwin van der Sar did one earlier in the season against West Brom and Joe Hart one the other night against Leicester in the FA Cup. But they don’t make too many errors, the great goalkeepers.”

“He made mistakes at Manchester United and recovered from them. He is a fantastic keeper. The big man has saved us many points this season and been excellent in every game. He is human and will bounce back from that and I’m sure he will want to atone and be as good as he has been for the whole season.” Foster is now firmly back in the England fold and could not help joking “Goalkeeper coach Dave Watson will claim all the credit, he’ll be after a pay rise for sure.”

Old Trafford fans cannot possibly begrudge Foster his new found confidence but will be hoping that their former keeper will save his best form for future clashes against United’s title rivals.

Would Foster have been able to claim United’s senior spot had he remained at Old Trafford?