Manchester United showed exactly why they’re on target to win another title – they simply refuse to get beaten even when they are comprehensively outplayed away from home by a good Blackpool side and trailing by two goals at half time. United made one of their now famous comebacks as they roared back to surge five points clear at the top of the table. Completely on top with a good lead, it appeared Blackpool would end United’s unbeaten record and achieve a result that would go down in their history books. But those goals from Craig Cathcart and DJ Campbell were not enough to deny United as they exploded into life with the introduction of Ryan Giggs and Javier Hernandez.

‘Chicharito’ struck the equaliser with 15 minutes remaining but once again it was Dimitar Berbatov who did the damage for United tapping home his side’s first just two minutes earlier before driving home his 20th goal of the season – and his fifth in four days – to send The Reds five points clear of their rivals. 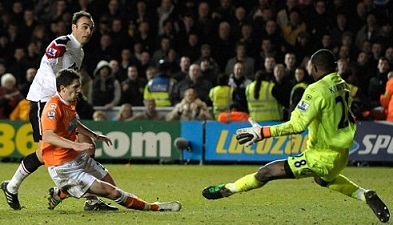 Daily Telegraph – If they are looking for a new, white knuckle ride to tempt more visitors to Blackpool Pleasure Beach, they should call it the Manchester United Experience and issue a health warning that it is not for the faint hearted. Sir Alex Ferguson’s team now sit five points clear at the top of the Premier League having extended their unbeaten league run to 28 games with an incredible victory at Bloomfield Road.

Outplayed for 70 minutes and trailing 2-0 to Ian Holloway’s spirited Blackpool team, United appeared destined to emerge from their trip to seaside with nothing more than a painful hangover. But two goals in three minutes from Dimitar Berbatov and Javier Hernandez cancelled out Blackpool’s lead before Berbatov, a hat-trick hero at the weekend, won the game with his second on 88 minutes. With 20 minutes to go, the title race was set to be blown wide open. At full-time, it appeared all over bar the shouting. Full Report

Blackpool Gazette – Blackpool did themselves proud against Manchester United at a packed Bloomfield Road, but ultimately it all ended in disappointment. The Seasiders raced to a two-goal lead courtesy of headers from Craig Cathcart and DJ Campbell. But in what could be Charlie Adam’s last game for the club, Sir Alex Ferguson’s Reds scored three second half goals to spoil Pool’s party.

The evening started superbly. Cathcart struck on 15 minutes, sending a powerful header into the roof of the net from Adam’s wicked right wing corner. The stadium erupted. Most Blackpool fans turned up just hoping to see their team score, let alone get a result. Nemanja Vidic almost headed past Edwin Van Der Sar, then Elliot Grandin blasted over after being teed up by Luke Varney. Incredibly it really was one-way traffic and it got even better moments before the break, a second goal arriving from another Adam corner from the right. Full Report

Manchester Evening News – Manchester United roared back from two goals down to defeat Blackpool at Bloomfield Road and stretch their lead at the top of the Premier League. Former Red Craig Cathcart headed the Seasiders into the lead before DJ Campbell doubled the advantage just before half time. Shortly after the break, referee Peter Walton was unmoved after Rafael’s hefty challenge on Luke Varney in the box, leaving Blackpool boss Ian Holloway fuming on the sidelines.

Dimitar Berbatov pulled a goal back before substitutes Ryan Giggs and Javier Hernandez combined for the Mexican to slot home the leveller. And with just two minutes of normal time remaining, Paul Scholes sent Berbatov clear and the Bulgarian slammed home his 20th goal of the season. The only worry for United was Rafael’s departure with what appeared to be concussion in the second half. The result leaves United five points clear of second-placed Arsenal and maintains their unbeaten run this season. Full Report

3 thoughts on “‘Berbagoals’ wins it for United at Blackpool”