Legends simply don’t come any bigger than this. Blackpool’s Jimmy Armfield and Manchester United all time great Sir Bobby Charlton are just two of England immortals. When a report like the one by Steve Curry in the Mail Online appears, it will be amiss of Truly Reds not to reproduce it for those who may not have had an opportunity of reading it. That, surely, is the reason for this blog to exist and why we see it as an obligation to the millions of Reds fans around the world. If any of our readers have already come across this report, please give it a miss. If not, here’s your chance to relive some brilliant memories from two of Englands greatest players.

Curry reports that “When Manchester United face Blackpool on Tuesday night, it will be the first league meeting of the teams for 40 years. United’s last visit to Bloomfield Road was Blackpool’s final game in the top tier until the start of this season and the 1-1 draw in May 1971 marked the final match of Blackpool’s England great Jimmy Armfield. 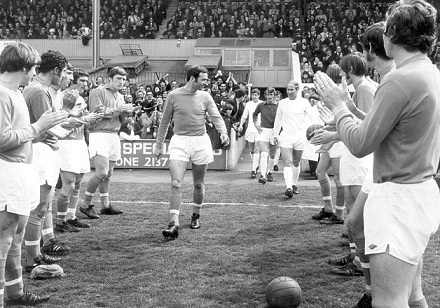 Sir Bobby Charlton – It was a fitting finale to Jimmy’s career and one I look back on with fondness. By then we had become firm friends because not only had we played in the same army sides when we were both doing national service, but we were pals from our appearances with England. Jimmy had not won his first cap when I became a regular in the side, but between 1961 and 1964 we were both usually in Alf Ramsey’s team. 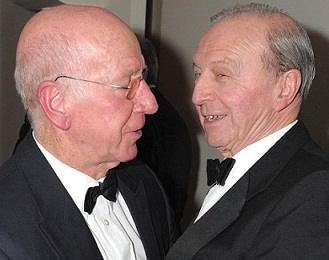 Of course, in those days there were a lot more Lancashire derbies because clubs like Blackpool, Blackburn, Burnley, Manchester United, Preston, Bolton and Everton were all in the first division. At that time we were all earning the same wages, no matter who you played for, and there was a great camaraderie.

By the time that final game between the clubs came around, Jimmy and I had become firm friends. He was a lovely man and was really Mr Blackpool, as many people still see him.

There were some big names in the Blackpool side of that generation and, as a young player coming into the side, he was able to mix and play with his heroes Stanley Matthews and Stan Mortensen. He was one of the pioneering, overlapping full backs and operated down the same right flank as Matthews.

West Ham were the first team to introduce a players’ lounge, where both teams could mix and have a drink, and that later became common when we went to these derbies. There will be nobody prouder than Jimmy about Blackpool once again playing the top sides and there will be a lot of nostalgia in the air this evening.

I’m pleased to say that our friendship is as strong now as it was when we played together. Jimmy has become one of the most respected match analysts on radio and, like me, he has stayed in touch with the game. He has always been a gentleman and a great model as a player and as a man.

Jimmy Armfield – I shall always remember that last game against United and I find it astonishing that the two teams have not met since then. This is a big occasion, a landmark for Blackpool.

After I had been diagnosed with a chronic knee problem, the consultant advised me not to carry on playing and I felt it was fitting that United were the opposition for my last game because Bobby would be there.

There were 30,000 in the ground for the farewell and both sides lined up to form a guard of honour as I ran out on the pitch. I recall posing for the photographers alongside Bobby.

We earned a 1-1 draw in that game – a good result for us then, as it would be tonight. I don’t recall being too emotional after the game, although I am quite a sensitive type. I was realistic enough to know nothing goes on forever.

I had played until I was almost 36 and my routine has always revolved around Blackpool Football Club. On that last day, I can remember Tony Green scored our goal and that at the end all the fans came on to the pitch to say their farewells.

Bobby and I have sustained our friendship over the years and, in fact, we were together very recently at a function staged by the Lancashire Partnership Against Crime, which I chair.

It was a nostalgic get-together because I also invited Roger Hunt, Ian Callaghan and John Connelly, so we had five members of the World Cup squad from 1966. I’m just hoping I can meet up with Bobby on what I know will be an emotional night for Blackpool.

Does anyone have any memories of Blackpool in football’s top flight?