As Manchester United travel to the seaside on Tuesday night for the first time since 1974, younger fans may regard Blackpool as a newcomer to top flight football but that was not always the case. It was one of England’s leading clubs after the war with legends like Sir Stanley Matthews and Stan Mortensen striking fear in everyone they faced. Their 1948 FA Cup Final meeting with United was described at the time as “one of the greatest cup finals in history”.  United had reached Wembley via a seemingly impossible route that saw them face first division opposition in every round. After beating  Aston Villa 6-4 in round three they had to face league champions Liverpool who were beaten 3-0. That was followed by a 2-0 victory over Charlton then a 4-2 win against Preston. Centre forward  Stan Pearson scored a hat-trick in the 3-1 semi final defeat of  Derby at Hillsborough before facing Blackpool in the final.

There was an unusual decision taken by the FA when it announced that Blackpool would not be wearing their traditional tangerine strip due to its clashing with United’s red. Instead, they wore white shirts with black shorts but it was also decided that United had to wear blue shirts and white shorts, meaning both teams played in a changed strip.

The all Lancashire Cup Final of 1948 was one of the best exhibitions of football seen at Wembley. It isn’t often that the football in the Final reaches the noblest heights; the excitement, the importance of the occasion and the huge crowd all too often combine to cause ‘Wembley nerves’. 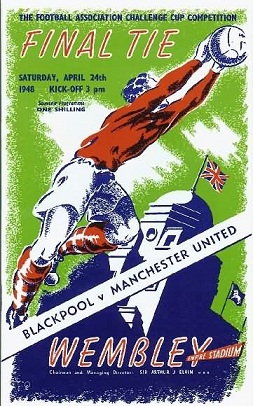 United had been among the Final probables from the start of the competition and rapidly became the favourites. In the first half at Wembley, which ended with Blackpool in the lead 2?1, United’s brilliant play had not been rewarded as it should have been. After fifteen minutes Mortensen was tackled from behind inside the area, and Shimwell scored from the spot to put Blackpool in front. Five minutes after Rowley had equalized from Delaney’s pass, Blackpool scored again with Mortensen’s cross?shot.

Rowley darted between two defenders to head United level again from a quickly taken free kick, and it was Crompton’s save from England international Mortensen’s fine shot in the eightieth minute that proved to be the turning point. Play immediately switched to the other end and Pearson’s hard shot from twenty yards flew into the Blackpool net via an upright. Three minutes later Anderson made the final score 4?2 to United.

United, with their extra stamina and power in attack had just about deserved their exciting victory ? their twelve corner kicks to Blackpool’s four had been a fair reflection of the play.

It had been 39 years since Billy Meredith had lifted the FA Cup for United and finally the long drought was over, with the cup heroes etching their names in the club’s history books.