A lot of the glamour has gone out of the FA Cup in recent years but the Manchester United v Crawley fifth round tie will go a long way towards restoring much of it. It’s what the Cup is all about with interest certain to be sky high. Boss of the Blue Square Premier club Steve Evans was delighted with the draw, saying: ‘It was just a surreal moment. We got the tie that everyone in the country wants. I suppose if you are Arsene Wenger or Alex McLeish you don’t want that draw – but we did”

“We will approach the tie in a really positive nature” he continued “the only non-league club capable of beating Manchester United is Crawley Town as we stand  today, miracles do happen. ‘This is going to be the biggest day in our lives but we will give them the respect that Real Madrid gave them… the utmost respect. 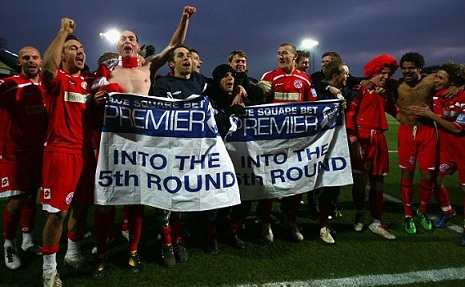 The Old Trafford clash takes place on the weekend of February 19-20, just days before United travel to Marseilles for the Champions League first leg tie. It will therefore be interesting to see what sort of lineup Sir Alex decides to field.

Should Ferguson field his strongest side against Crawley?

1 thought on “Crawley Town will give United "the utmost respect"”