“I love United but I’m sick of Manchester” one first team player confessed last week. Respected journalist Andy Mitten has revealed in FourFourTwo magazine that “Like Gabriel Heinze before him, he fancies Real Madrid.” There have been plenty of talk in the last few months linking former France defender Patrice Evra to the Spanish giants and despite his continuous denials, the old saying of where there’s smoke there’s fire immediately comes to mind. Mitten has had a long, sometimes close association with Manchester United footballers for many years and pulls no punches when remembering that “Heinze must be the most disappointing player I’ve ever interviewed”

“Heinze was disappointing because he couldn’t be arsed” says Mitten “he arrived at Old Trafford in 2004 and had a magnificent first season. Fans loved his tackles, where he seemed to hang in the air like a drunken hawk and then lash out to win the ball with a kung-fu kick. The Stretford End even sang “Ar-gen-tina!” – to outrage and befuddlement at away grounds full of Little Englanders from Portsmouth to Blackburn. And to pleasant surprise in the pampas, where they thought the English hated them after the Falklands conflict.” 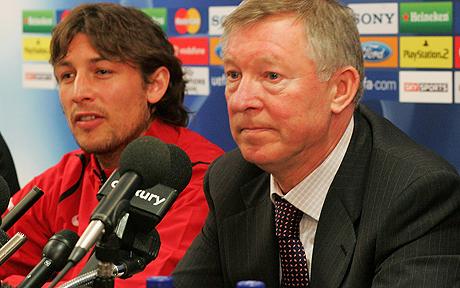 “We fixed an interview with Heinze and he was a knob” he said bluntly “he said we had five minutes, when 30 was the norm. I spoke in Spanish and told him we’d rather have none. He said we had ten. He probably thought we meant $10 million net per annum for him, with a further 10% for his agent. So he talked a little, but he didn’t want to be there when he could have been at home counting cash or engineering another move and signing on fee. He was injured later that year and would eventually lose out to Patrice Evra as United’s left back. He wasn’t missed.”

“I asked around about the Argentinian and received far from glowing references from team mates at Old Trafford. And from journalists in Madrid, where he was equally unpopular with players” Mitten says “by that time he’d become a liability on the pitch too, so he went to Marseille – another signing on fee. United will play the French champions in two weeks. I was going to do this blog on the Manchester derby but I’ve worked myself up so much about Heinze that I’m off to buy some eggs, with the intention of launching them at his curtain draped head whenever he touches the ball in the Velodrome.”

Will you be surprised if Evra ends up going to Madrid?