Let’s not put too fine a gloss on it. What happened in the second half at Stamford Bridge was a shock to the system, it’s difficult to put it any other way. I must also confess however that I’m a born optimist, the glass is always half full as far as I’m concerned, so when I looked back to what happened just two seasons ago, Manchester United’s position started to look a little brighter. History does sometimes repeat itself after all. The Chelsea defeat was game 28 of the season, remember game 28 in March 2009? That was when United got walloped 1-4 by Liverpool at Old Trafford in which Nemanja Vidic was also sent off. United then went to Fulham the following week and again got beaten 0-2 with both Paul Scholes and Wayne Rooney getting red carded. 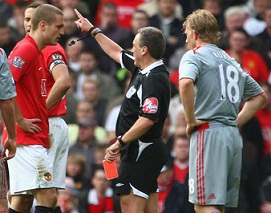 United still led Chelsea and Liverpool by four points but all the pundits were convinced that their season was crumbling before their eyes. It proved to be nothing more than wishful thinking of course as Sir Alex Ferguson steadied the ship, clinched the title with a four point margin over Liverpool and led United to a second successive Champions League final.

Remember that Premierships are won over a 38 match season irrespective what happens in some of the battles along the way. Yes, the defeat on Tuesday night was undoubtedly a kick in the guts, next Sundays clash against a desperate Liverpool will be fought like a Cup Final by the Scousers in a last ditch effort to deny United a record breaking 19th title and we’re certainly in for a tension filled climax to the season.

The optimist in me says that Ferguson and United are very capable of completing the job barring some disastrous, unforseen events. We have all seen it before and I have little doubt that we can see it again. Why? Because everyone at Old Trafford, from Sir Alex down have a special, unique quality – they BELIEVE

Will United overcome the hiccup suffered at Chelsea?