It’s wide open now! Chelsea’s 2-1 defeat of Manchester United at Stamford Bridge will not help the Blues retain their title but it opens the door for Arsenal to take the initiative in what still appears to be a two horse title race. Yet it looked so different at the break. Wayne Rooney had given United a deserved lead when they were clearly dominating the game and gave the impression that Chelsea were going to find it difficult to get back into it in the second period. But that’s precisely what the reigning champions did, taking the game to United and totally controlling the middle of the park for long periods.

This was only the second loss for United this season, the irony being that for a team renowned for making stirring comebacks, both of those defeats came after they had taken the lead. To make a bad night worse for Sir Alex Ferguson, captain Nemanja Vidic was red carded in the dying moments and will miss the away trip to Liverpool on Sunday. With Rio Ferdinand not expected to recover from injury, it leaves Ferguson with a huge headache for what promises to be another torrid clash.

As might have been expected, Sir Alex was far from impressed with referee Martin Atkinson saying that “We played very well and I thought it was a great performance by us, we didn’t deserve that and that’s three years in a row that referees’ decisions have changed the game.” I’m hesitant to add this comment which may sound like I’m second guessing Sir Alex because I certainly don’t believe that I have a right to. My thinking before the game was for Dimitar Berbatov to start the game together with Rooney, then throw in the lightning fast Hernandez for the last half hour or so when some of Chelsea’s old legs should have theoretically began to tire. Would it have made any difference to the final result? As usual, we will never know. 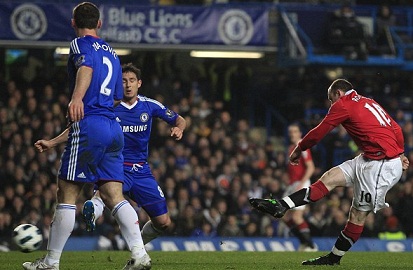 The Independent – Champions Chelsea dragged themselves away from the Barclays Premier League abyss as David Luiz and Frank Lampard struck to complete a memorable comeback win over Manchester United. To make matters worse for the leaders, they had skipper Nemanja Vidic sent off for a second bookable offence in stoppage time – meaning he will miss Sunday’s trip to Liverpool. Trailing to Wayne Rooney’s fifth goal in as many league games at the break, Chelsea levelled a thrilling encounter when Luiz volleyed home his first goal since a £25million transfer window move from Benfica.

And when Zhirkov went down under Smalling’s challenge 12 minutes from time, Lampard strode up to extend an unbeaten home record against their visitors dating back to 2002. More importantly, it cut United’s advantage over Chelsea – who have a game in hand – to 12 points and open up the possibility of Arsenal closing to within a point if they win their oustanding game against Tottenham. Full Report

Daily Telegraph – Chelsea are not going to let the title go without a fight. Frank Lampard and company finally remembered they were champions, playing with a tempo and hunger in the second half that turned this exceptional game on its head. Trailing to Wayne Rooney’s first-half strike, Chelsea rallied in the second period and equalised with a magnificent volley from David Luiz, not the winter signing expected to score first. With Fernando Torres again subdued, the penalty winner came from Lampard.

This game produced such compelling entertainment that the respective fans soon forgot boo Rooney and Ashley Cole for their recent weaknesses. This was a terrific game, a match that showed all the tempo and drama of the Premier League. There were fine goals and even the sight of Ryan Giggs arriving to equal Sir Bobby Charlton’s Manchester United club record of 606 league games. Tackles thudded in. Passes were swept wide. The flow was relentless, a red and blue tide rolling between Shed end and Matthew Harding Stand. Full Report

Manchester Evening News – A controversial penalty gave Chelsea victory against Manchester United in a pulsating ecnounter at Stamford Bridge. Wayne Rooney’s cracking first-half shot put the fast-starting Reds in front, but Brazilian David Luiz volleyed home his first Chelsea goal after the break to level the scores. There were chances at both ends as the intense action continued, before referee Martin Atkinson controversially awarded a penalty for Chris Smalling’s challenge on Yuriy Zhirkov.

Lampard stepped up to beat Edwin van der Sar and blow the title race back open. To compound United’s misery Nemanja Vidic was sent off in injury time, which means he will miss the game against Liverpool at the weekend. United now lead second place Arsenal by four points but have played a game more. It was just United’s second Premier League defeat of the season. Full Report

Will the dismissal of Vidic prove to be more costly than the defeat itself?