Still dejected over the kick in the guts received at Chelsea on Tuesday night? It was certainly the biggest one we got this season, even worse than the recent shock defeat at Wolves or the dropping of two valuable injury time points at Everton. What made it so much worse is that United produced possibly their best away performance in the first 45 minutes. I genuinely felt during the break that a draw was the worst we’re were going to go away with and all three points a distinct possibility. Then a series of events came together during the second half to leave United cruelly empty handed. But all is not lost according to The Independent’s Football Correspondent Sam Wallace. He looked at the issues facing all the title contenders then put his neck on the chopping block by predicting how the title race will finish.

They are no match for the team that won it three times in a row between 2007 and 2009 but this United side are surely the least brittle of the contenders this time around. Their big games are against Arsenal at the Emirates on 1 May and Chelsea at home six days later. Realistically, they need only to draw these if they can mop up the wins in what is otherwise a fairly straightforward run-in.

This season so far, United have won three out of the six games in which they have faced a fellow top-five team. Their defeat to Chelsea on Tuesday was their first to a club from that group. Their remaining fixtures, aside from the Arsenal and Chelsea games, will set some interesting tests. Saturday lunchtime kick-offs next month against West Ham and Newcastle are not simple.

Form-wise, United have goals from Javier Hernandez as well as Wayne Rooney and Dimitar Berbatov. It is not the first time that this team has had to cope with injuries to Rio Ferdinand. Chris Smalling looks the part now, in spite of the soft penalty given against him on Tuesday. Antonio Valencia and Anderson should be back by the season’s finale.

Verdict Despite the relatively unspectacular nature of this United side, the prediction is for them to win their 19th title with a game to spare. 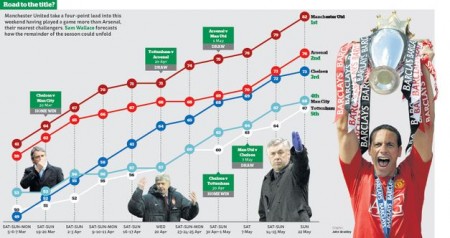 A valiant effort all season but the continuing injury problems of Robin van Persie are a worry. When the Dutchman plays, Arsenal look infinitely more dangerous than when his role is taken by Marouane Chamakh or Nicklas Bendtner. The latest injury is thought only to require three weeks out, but with Van Persie you just never know.

Arsenal miss Theo Walcott for the next two weeks and on Saturday against Sunderland there is also no Cesc Fabregas or Alex Song. Given Sunderland’s current form, Arsenal should still win that game but it would not be beyond them to drop points somewhere unexpected. The away games at Blackpool (10 April) and Bolton (24 April) stand out in that respect. It will only take one unexpected draw and one careless defeat to let United get away.

Arsenal’s run-in includes three standout games: Liverpool and United at home, Tottenham away. They have to win at least two and draw one of those three to cut into United’s lead. If they beat Barcelona next week they could find themselves spread very thin on two fronts, with Arsène Wenger tempted to rest key players in certain games.

Verdict A creditable second place, their best finish since 2005. But left wondering at what might have been.

Third place is nowhere for this club usually – they have finished that low only once in the previous seven seasons. But this year has been different and, currently eight points off Arsenal in second, there is much work for Chelsea to do to make absolutely sure of Champions League football next season.

Tuesday’s win over United shows that this is still a Chelsea team that can rise to the big games, which bodes well for the Champions League. The 4-4-2 formation is now their settled way of playing and, although they were overrun by United in the first half at Stamford Bridge, they did come back into the game after that. David Luiz looks the part; Fernando Torres is sharper – it surely cannot get any worse.

That said, next Monday night against Blackpool does not look straightforward. Chelsea could slip up there, but it is hard not to see them going on a run at some point that takes them up beyond Manchester City and Tottenham. Their games against Tottenham and City – crucial in the battle for Champions League places – both look winnable on Tuesday’s evidence.

Verdict Strong end to the season, possibly undefeated. Gets them out of trouble but never truly in contention for the title.

Fourth place was identified by City’s owners as the minimum acceptable achievement last summer. It would be one step up from last season – and open the door to Champions League football, via the qualifying competition, for the first time in the club’s history. Given their currently patchy form, many at City would take that now.

There have been injuries of late to Vincent Kompany and Nigel de Jong, as well as the longer- term problems for Adam Johnson and Shay Given. The temperament of Mario Balotelli is always a concern, as is the reliance on Carlos Tevez. Progress to the last 16 in the Europa League also means that City are stretched.

City have won just once in their six games against top-five sides. If they are to keep up with Arsenal, they need to get results in the big games left: Chelsea away and Tottenham at home. Given Liverpool’s climb up the table and with the imminent return of Andy Carroll, City’s Monday night at Anfield on 11 April is significant.

Again, it could come down to a shoot-out with Spurs for fourth. It is crucial City do not lose when Spurs visit on Sunday 17 April – which they did last May.

Verdict Fourth place and very pleased with it. Albeit by the narrowest of margins from Spurs.

There has to be one team that loses out and Tottenham proved against Blackpool last week that they are still capable of daft defeats when it is least expected. Should they eliminate Milan from the Champions League at White Hart Lane on Wednesday then Harry Redknapp will find himself trying to stay alive in two competitions with a squad weakened by injuries.

In last season’s push for the fourth Champions League place, Spurs did not play European football, although they did reach the semi-finals of the FA Cup. Their strong suit was their last six games in the Premier League. They won four out of the first five, including victories over Arsenal, Chelsea and City, and secured fourth place with a game to spare.

Now they have arguably the hardest run-in of any of the top five, playing City, Chelsea and Liverpool away and Arsenal at home. Gareth Bale’s back problem has still not been resolved, although he should be back within two weeks. Rafael van der Vaart has been in and out with a calf injury; Tom Huddlestone and Younes Kaboul are still out along with two long-term injured, Jonathan Woodgate and Ledley King.

Verdict Just outside the Champions League places. Too many injuries to keep their noses ahead of City

So does that make me feel any better? Not a whole lot because predictions are generally not much more than educated guesses. After all, the only thing that’s predictable in the Premier League is its unpredictability. But at least it’s comforting to know that Wallace still has so much faith in the side. History also shows that United had an even bigger shock at the same stage of the season two years ago – remember the 1-4 Old Trafford thumping by Liverpool…and where the title ended up a few weeks later?

Do you expect United to fully recover from the defeat at Chelsea?