If  the question was ever asked as to what the most dramatic single moment in a football match has been, many would opt for the Zinedine Zidane head butt on Italy’s Marco Materazzi in the final of the 2006 World Cup in front of a world wide audience of more than 700 million people. But was it?  Just as many will argue that the infamous kung fu-style kick on a fan in the stands by another Frenchman was even more astonishing. Who can ever forget that breathtaking moment? Yet even today, Manchester United legend Eric Cantona rates that 1995 incident as the ‘best memory of my career’

When asked on the BBC Football Focus programme what the highlight of his career was he quickly responded ‘When I did the kung fu kick on the hooligan because these kind of people don’t have to be at the game. I think maybe it’s like a dream for some, you know sometimes to kick these kind of people” he explained “so I did it for them. So they are happy. It’s a kind of freedom for them. So I speak about that because maybe they felt it. Because they felt something special physically. Maybe it was a different feeling. It’s a great feeling, but different.”

While King Eric undoubtedly took much satisfaction from that moment of madness, it cost the club dearly. The Reds dropped 14 points in the remaining 16 matches while Cantona was serving his eight month suspension. United failed to retain the title by one single point, a point that nobody can seriously doubt would have been obtained had the French genius been available.

There would hardly be a football fan anywhere who has never seen that incident but in case anyone has been hiding under a rock during the last 16 years, or want to have a look at it again, here it is. Simply click on the photo 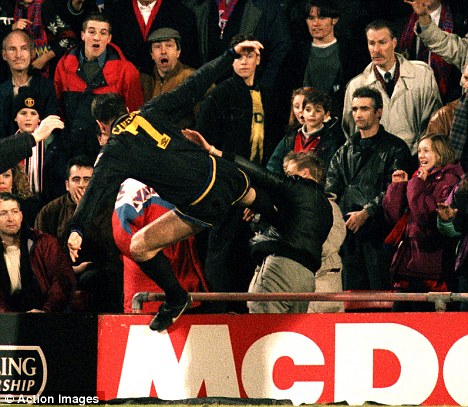