The first impression one got upon looking at the starting line up Manchester United fielded in this Old Trafford quarter final was that the FA Cup was not high on Sir Alex Ferguson’s list of priorities. He surprised by naming seven defenders to face Arsenal with one eye firmly fixed  on Tuesday nights Champions League meeting with Marseille and setting up his side to simply avoid defeat. In the end, United did far better than that, handing the Gunners a morale shattering 2-0 defeat to secure a trip to Wembley for a semi final which keeps them on track for an unlikely treble! Talk of such an achievement is far too early of course, there are too many pundits who feel that they’re not worthy of it, but the fact remains that after this result, United are still very much in the mix.

Ferguson admitted that the European clash was a factor when he stated before the game that “I have tried to balance the team with youth and energy. I have Tuesday night to consider but hopefully I have come up with the right ideas. Arsenal is always a competitive game and I have decided to put John O’Shea with Darron Gibson in the centre, Rafael and Fabio on the flanks and Javier Hernandez and Wayne Rooney will lead the line.” At the end of ninety minutes he was proven to be right – yet again! 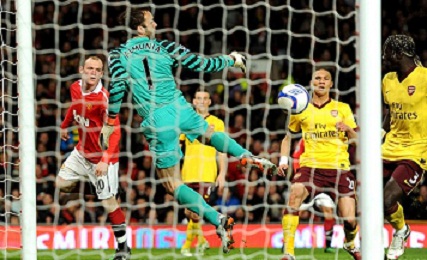 The Telegraph – This was a day for chastising old foes. Sir Alex Ferguson started it by letting rip at Kenny Dalglish and Graham Taylor in his programme notes and ended it by sitting satisfied in his dugout as Arsène Wenger gesticulated in frustration as his side slipped out of another competition. After the rage and the paranoia of the last two weeks, this was Ferguson getting back to business. It has been grim fortnight for Wenger, with the Carling Cup final, the defeat to Barcelona and now this.

His job now is to motivate his young group of players into regaining their focus in the league. The title race is still wide open but they will have to improve markedly if they are to beat United at the Emirates on May 1. That is the game that could save Arsenal’s season. Ferguson remains in pursuit of the treble and he will have been well satisfied by the way this game panned out. His tactics were clear from his team selection. He paired Darron Gibson and John O’Shea in front of the back four to create congestion in midfield and looked to hit Arsenal on the break. Full Report

arsenal.com – Arsenal bowed out of the FA Cup after a 2-0 defeat at Manchester United on Saturday evening. Arsène Wenger’s side had been criticised for a backfoot display in their Champions League exit at Barcelona in midweek. But this game was very different. Arsenal had the majority of possession and nearly twice the number of shots on target as their opponents but were found wanting in the key moments.

They came just before the half hour when Fabio thumped home after Manuel Almunia palmed a header from Javier Hernandez into his path. Then, four minutes after the restart, Wayne Rooney guided home a header from close range. Full Report

manutd.com – United are heading to Wembley for the FA Cup semi-final after powering past title rivals Arsenal with a goal in each half from Fabio and Wayne Rooney plus a virtuoso goalkeeping performance by Edwin van der Sar. The Dutchman’s dream of winning the globally famous competition for the first time in his final season is now very much on and deservedly so after his string of saves, some of them world-class, denied a Gunners team desperate not to flunk a third trophy quest in a fortnight.

Sir Alex Ferguson rang the changes for this heavyweight contest, some of them forced, following last Sunday’s disappointing league display at Anfield. His response to the expected absence of Nani was an intriguing one, as he opted to field the Da Silva twins on the left and right flanks. Nemanja Vidic returned at the heart of the defence after suspension, Irish pair Darron Gibson and John O’Shea were drafted into central midfield with Michael Carrick and Paul Scholes rested altogether, possibly with Marseille on Tuesday in mind. Meanwhile Antonio Valencia was named in the 18 for the first time since breaking a leg last September. Full Report

6 thoughts on “Whisper it, United still on track for unlikely treble!”