When the chant of  “One More Year” went up late in the game at Old Trafford on Saturday, even Arsenal manager Arsene Wenger and the 9,000 visiting fans must have been somewhat begrudgingly nodding their heads. Veteran Manchester United goalkeeper Edwin van der Sar was simply superb showing once again why he has been one of the worlds greatest for so many years. The unanimously agreed Man of the Match produced some vital saves to keep the Gunners at bay throughout the FA Cup quarter final prompting Ferguson to hail his display after the match.

“Edwin was fantastic” Sir Alex said “he made a mistake last week at Liverpool and dropped a goal but he’s more than repaid us in full today. It’s not just his ability as a goalkeeper, it’s his calmness he brings to everyone – that’s a vital ingredient he has.” 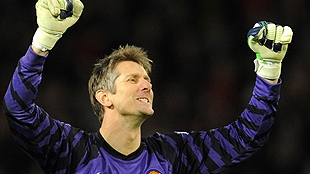 For his part, the Dutchman admitted that “I think we played quite well against Arsenal. Luckily I pulled off a couple of saves and we defended well. It was important of course because we lost to Chelsea and Liverpool so the gap in the league is now non existent. We needed to win tonight for another chance of silverware.”

The 40 year old was a key catalyst in United’s success, producing a performance that belied his age. van der Sar has already announced his intention to retire at the end of the season and when questioned whether he is tempted to change his mind he insisted “No, definitely not” even if he enjoyed the crowd singing “Fergie, Fergie sign him up”

Sir Alex responded by telling MUTV “He’s a fantastic goalkeeper. We just wish he was only 21 instead of coming up to 41. Nature catches eventually in life.” Ferguson’s power of persuasion has long been documented but convnicing his keeper to extend his contract for “One More Year” may well be beyond him.

The veteran is after all no starry eyed teenager, he knows full well what his priorities are at this stage of his life. Nobody can begrudge his decision should he decide to go through with it but United fans will more than welcome any possible reassessment of his future plans.

Would you be happy with a 12 month extension on van der Sar’s contract?