“If Rupert Murdoch sees something he likes he tends to pay up for it” financial analyst Patrick Yau said this week as the US based Australian media mogul was expected to pay at least 875p a share to secure the shares in BSkyB which he needs to acquire the whole of the company. And it will not be the first time in his business career because Murdoch has never taken a backward step in his dealings. Had he succeeded in his bid to take over Manchester United in the late nineties, the Glazer family may have never been heard of raising the question as to what the clubs standing will be today.

Describing in detail how the audacious attempt by Murdoch’s BSkyB television company to buy United was halted, Not for Sale! Manchester United, Murdoch and the Defeat of BSkyB is a 1999 book by Adam Brown and Andy Walsh which draws on a variety of sources to track the events following the announcement of the bid. It examines the reaction of both the media and the football world to the astonishing outcome. After seven months of hard campaigning and a coalition of forces centred around the independent Manchester United Supporters Association, the British Government was forced to block the bid and save the club from becoming another of Murdoch’s many conquests. 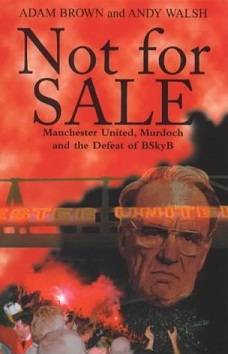 On 9 September, 1998, the plc board of Manchester United Football Club decided to accept BskyB’s takeover bid. This book charts the campaign waged by both fans and shareholders of the club against the bid made by the Rupert Murdoch owned broadcasting company, until its eventual rejection at the hands of the Monpolies and Mergers Commission and the DTI on 9 April, 1999.

From being told “You’re tilting at windmills” after seven months, those behind the campaign had the last laugh. Brown and Walsh examine in detail the bid itself and the events which followed, whilst keeping the proposed deal and the campaign fought against it in a wider context than solely the club and corporation in question.

The outcome is a work with focus for detail but awareness of a broader scenario. The many supporters of Manchester United all around the world will no doubt be interested and the story told will no doubt enlighten most of them on the real working of the club.

For the rest of us, the conclusion may not be so relevant. However, the principles remain important. What if it was your club? As the implications of this particular episode take on ever greater importance, this report will for some time remain a document of importance for those involved and interested in the issue it confronts.

Would United have been better off with Murdoch instead if Glazer?