A nerve wracking final 10 minutes at Old Trafford saw Manchester United safely through to the Champions League quarter finals after a Wes Brown own goal gave Marseille a sniff of getting a late equaliser to qualify on away goals. Javier Hernandez had earlier scored twice to give United what appeared to be some much needed breathing space until Brown headed into his own net from a Marseille corner kick. The overwhelming feeling amongst United fans when the final whistle went was one of sheer relief!

If this display proved anything, it was the fact that skipper Nemanja Vidic is invaluable in the centre of the United defence with the Smalling-Brown combination never looking totally comfortable. The other was how much United has missed Antonio Valencia during the last six months. As effective as Nani has been during his absence, Valencia’s penetrating  performance in the 30 minutes after replacing Nani was superb. Welcome back Antonio. 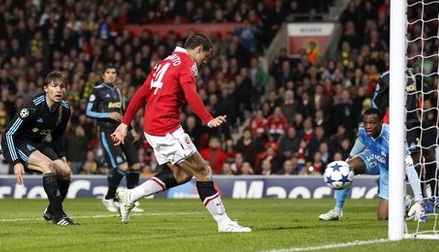 BBC Sport – Manchester United survived a late scare against Marseille before advancing into the Champions League quarter-finals for the fifth season in succession. Javier Hernandez cemented his growing reputation with two close-range finishes to put United in control – but a late own goal from Wes Brown forced an anxious finale as Marseille pressed for the equaliser that would have sent them through.

Sir Alex Ferguson looks to have unearthed a goal poacher in the mould of Ole Gunnar Solskjaer in the young Mexican and he was on the spot inside five minutes to slide in Wayne Rooney’s ball across the face of goal. Marseille had the chance to snatch a crucial away goal but cast their best opportunities aside with Andre-Pierre Gignac and Souleymane Diawara the guilty men in the first half. Full Report

Uefa.com – Manchester United advanced to their fifth consecutive UEFA Champions League quarter-final after a nervous victory against Olympique de Marseille. United owed their progress to a goal in each half from Javier Hernández – his first in the competition on home turf – and although Wes Brown’s 82nd-minute own goal ensured a tense finish, the hosts had done just enough to advance and leave OM regretting their missed chances. Sir Alex Ferguson’s side therefore go into Friday’s draw for the last eight.

Sir Alex said in his programme notes that United could still produce their “fair share of magic” despite Didier Deschamps’ suggestion they lacked the fantasy of old. Shrugging off Nemanja Vidi?’s absence through injury, his team started as if determined to prove their manager right with their two most creative forces, Wayne Rooney and Ryan Giggs, combining to excellent effect. Full Report

Manchester Evening News – Manchester United progressed to the Champions League quarter-finals thanks to a Javier Hernandez double against Marseille. The Reds were off to a flying start when the impressive Wayne Rooney set up Hernandez for a close-range finish after just five minutes.

United doubled their advantage with 15 minutes to go when, after good work from substitute Antonio Valencia and Ryan Giggs, Hernandez tapped home his second. Wes Brown headed into his own net after 83 minutes to give the Reds a nervy finish, but they held on. Full Report