A historic fact first, Manchester United has never lost at home to a French team. That cannot guarantee anything of course but 21 year old central defender Chris Smalling is convinced that the Old Trafford factor can help steer United into the Champions League quarter finals. With the continued absence of Rio Ferdinand, Smalling is assured of partnering captain Nemanja Vidic in the middle of the defence for what promises to be a torrid second leg clash with Marseille. Based on the first leg performance, United has the quality to claim a berth in the last eight  but the French champions are dangerous opposition on the break

“We have been pretty immense at Old Trafford all season” said the England Under 21 international “so while we were disappointed not to get that away goal we will approach our task full of confidence.” It will be Smalling’s seventh Champions League game out of eight this term and although he did gain some European experience last year as Fulham charged to the Europa League final, the youngster accepts the standard this term has been far higher. 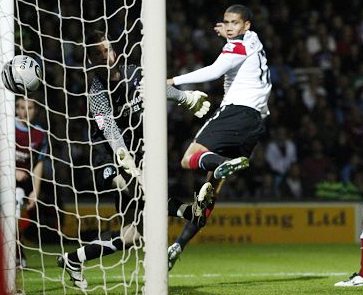 “I played in Europe with Fulham last season but that was in smaller stadiums with smaller crowds” he admitted “It was one step but the Champions League is the biggest competition. Hopefully I can get many more games because as each game passes I am getting more confident. Experiences like that are the only way you can improve. I do have a few jitters but I like these sorts of occasions.”

Sir Alex Ferguson remembers last season’s away goals defeat to Bayern Munich all too well and will be determined not to be eliminated in the same way once again. With the home fans in full voice, Smalling is confident United will avoid a similar scenario.

Both clubs are coming off momentous victories on the weekend. United pulled off that stunning 2-0 quarter final FA Cup win over Arsenal while Marseille defeated second place Rennes 2-0 in an important La Ligue match on Friday. Ferguson received some unexpected good news on the injury front with Nani making a speedy recovery and reported to be available.

As for Marseille, manager Didier Deschamps has a weapon in Mathieu Valbuena. There has been talk that the midfielder might be making a move to Old Trafford in summer but is currently recovering from a knee injury. Coming off the bench appears to be his best chance of being involved.

Have you been impressed with the Smalling-Vidic partnership so far this season?