Veteran goalkeeper Edwin van der Sar will not be saying goodbye to Manchester United when he hangs up his gloves after all but a mere fond farewell to his playing days. He has made it clear that he will remain at Old Trafford when he hangs up his gloves telling Dutch magazine Life After Football that he plans to stay at the club in a non playing role. The big Dutchman has ruled out a return to Ajax, thus going back on a 12 year old pledge to return to the club he won the Champions League with in 1995. “I might occasionally visit training with them but I will not be going regularly” he revealed. 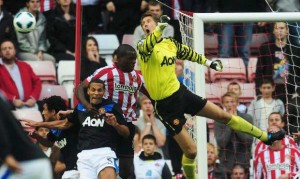 At the age of 40, Van der Sar will quit after a brilliant career in which he won just about every major winning medal available. “‘When I left 12 years ago I said I would return but I did not know then what great years I would have with Manchester United” he frankly admitted.

”I’m not going back to Amsterdam, though it would be very comfortable there with Frank de Boer, Danny Blind and Dennis Bergkamp” he said. Van der Sar is instead mapping out a role with United.

“It may be that I’m going to give Manchester United clinics in Asia, where the club is very popular, or something in commerce”‘ he added. ”I think this is interesting. I have already held some talks.”

One fan was right on the money when he made the comment that “That is a super decision for us, I am sure we will reap rich rewards from his insight and experience.”

How will United get the most benefit from VDS’s decision to stay Old Trafford?