And that came straight from the horses mouth. Red Nev was never the most pretentious footballer during his 20 year career with Manchester United and England. He always knew his limitations but sheer determination, undiminished will to win and a good old fashioned work ethic provided a career which genuinely earned him the often overused term of a legend. In an exclusive wide ranging interview with the clubs Inside United magazine last week, Neville was asked by Gemma Thompson to sum up his career in one sentence – his prompt reply was a simple “I did my best”, a typical, understated response from a man who never held any airs and graces about himself. Neville also remembers his many career highs in a fascinating one on one interview.

Favourite ever game to play in…The FA Cup semi-final replay against Arsenal in ’99. The reason being it was the last, what I would call, old-fashioned football match I played in. It was a night-game, a semi-final replay and everything happened in that game. The fans were on the pitch and holding players aloft after the game. Now because of security and health and safety, and all the restrictions, those days are becoming more difficult to create.

Greatest career moment…My debut and the last three minutes in Barcelona. My debut is probably my most special moment because to play at Old Trafford for United was always my dream. As for Barcelona, well, you can never describe that feeling, you could never put what happened into words. It would never do it justice. That would have to be the high, but there were some other unbelievable highs. We didn’t win the league for three years, then won it back in 2006/07. The nights of winning trophies, going out with the lads. Those nights are the greatest of your life, you can’t replace them.

The favourite goal I’ve scored..I haven’t got many to pick from! I’d definitely say my first one against Middlesbrough in May 2007, it was the certainly my best ever finish. We won the league the next day after Liverpool and Newcastle both dropped points so my claim to fame is that I won us the league! 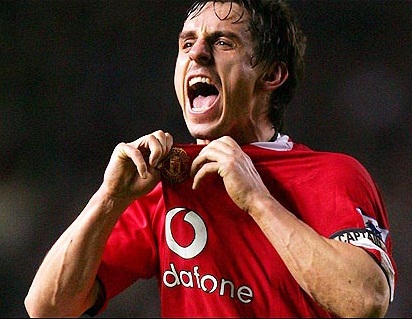 Best team mate…Wow, how can I pick one? I can’t separate my brother, Beckham, Scholes, Giggs and Butt, and I’d add Roy Keane to that list too. I used to laugh my head off just being in the company of those six people. They were just so funny all the time. Without wanting to sound corny I can’t think of many players I’ve not got on with during my time here. There haven’t been any bad eggs at this club because we just don’t have them.

Best training ground moment…Nicky Butt getting a tea-pot and burning Peter Schmeichel in a place where he shouldn’t have!

Biggest practical joker…Probably David May or former youth team player George Switzer. They were always up to something. Actually, you can add Scholesy and Giggsy to that list as well.

First manager rollicking…It was after a game against Chester for the ‘A’ team in 1993. He told me I wouldn’t be travelling with the team for quite a while, or words to that effect!

Most memorable manager team talk…Probably the one before the 2008 Champions League final. I wasn’t involved in the game, but I just remember the speech he gave. Going on to win the trophy made it an unbelievable night.

Favourite trophy…I’d always want to win the Premier League, but winning the European Cup was a great feeling.

Most cherished piece of memorabilia…I’ve kept a lot of my shirts down the years. There was one season when me, Scholesy, Giggsy, Butty and Phil all swapped shirts with each other so we had one of each – they’re special.

Worst experience in the game…The defeat to Vasco da Gama in the World Club Championships in January 2000.

Most respected ref…That’s a difficult one! I’ll say Collina.

Team you most wanted to beat…Juventus.

Favourite away ground to play at…Villa Park. It’s a ground I absolutely love and was lucky to experience so many great memories at.

Hardest opponent to defend against…Louis Saha. I had a disaster against him three seasons on the bounce when he was at Fulham.

Thing you’ll miss most about playing…Coming in to training every day and seeing the lads, and those few minutes when you’re stood in the tunnel waiting to go out for a game. That feeling of unease, anxiousness and excitement – nothing can replicate that.

Favourite trip you’ve been on…The first pre season trip I went on to Asia in 1995 when we went to Malaysia. The whole experience was a real eye opener.

Biggest change in football during your career?…The increase in the size of squads and the number of coaching staff there is now – everything has got bigger. The media side of things is huge now too.

How would you sum up your career in one sentence?…I did my best.

Gazza, you could not have given any more of yourself for the United and England cause.