Many has compared him with Manchester United legend Ole Gunnar Solskjaer, possibly because Javier Hernandez  has the knack of coming on as a sub and grabbing vital goals. But there’s an even older United legend that Chicharito can be likened to. Those with long enough memories may or may not agree that the young Mexican shows a lot of similarities to Denis Law. The King used to take his goals – lots of them, in much the same way that Hernandez does today. Always in the right place at the right time to somehow find a way of nicking the ball into the net. Rarely did either of them slam pile drivers from 20 or 30 metres like Wayne Rooney sometimes does but if there’s a sniff, you can bet that Chicharito will profit from it just as Law used to do. Here’s his two goals in Mexico’s 3-1 defeat of Paraguay on Saturday. 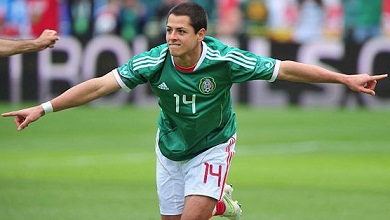 Does anyone who remember The King see similarities between him and Hernandez?

9 thoughts on “VIDEO: Is Chicharito another Denis Law?”