It has been many years, if ever, since the Champions League semi finals match ups were decided after the first leg of the quarters but unless someone springs a huge surprise next week, Manchester United will play Shalke 04 while one of the Barcelona and Real Madrid La Liga giants will be eliminated from the Wembley Final.

It has been many years, if ever, since the Champions League semi finals match ups were decided after the first leg of the quarters but unless someone springs a huge surprise next week, Manchester United will play Shalke 04 while one of the Barcelona and Real Madrid La Liga giants will be eliminated from the Wembley Final. Granted, United are far from home and hosed but the 1-0 defeat of Chelsea at Stamford Bridge will surely see them go through. Despite the narrow winning margin, United’s vital away goal should make the overall difference.

While under fire striker Wayne Rooney grabbed the winner after 24 minutes, it was veteran keeper Edwin van der Sar who proved to be United’s saviour with two critical saves in the first period and another in the second. Incidentally, since when does a goalkeeper get booked for asking one of his team mates to take a goal kick after he clearly took a knock a few minutes earlier as van der Sar did? You have to wonder how some referees dream up their decisions!

One other point. Television replays have deservedly shown Giggs’ devastating cut back to Rooney for his goal yet somehow neglected to repeat the brilliance of Michael Carricks 30 meter crossfield ball to set Giggs on his way. Pity!

Finally, PLEASE Edwin, ONE MORE YEAR! Has United taken another huge step towards a totally unexpected treble after this away defeat of a major challenger? Shhh, don’t even dare think about it – yet! 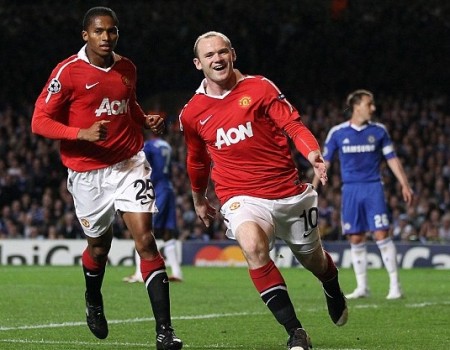 Daily Mirror – Another victory, chiseled out rather than beautifully crafted. Another goal for the man who cannot stay out of the headlines, Wayne Rooney demonstrating his incalculable value with the goal that puts United on course for the Champions League semi-finals again.

And as Chelsea moaned and groaned at the injustices of the world once more, another day in the continuing nightmare that is Fernando Torres’ Chelsea career. Where Rooney, it seems, cannot stop scoring, profiting from the time-defying brilliance of Ryan Giggs, Torres simply does not know where to start. Full Report

chelseafc.com – Chelsea’s Champions League campaign hangs in the balance after a night of frustration at Stamford Bridge. We fell behind midway through the first half to a Wayne Rooney strike, as we had done a month earlier in the Premier League, but on this occasion could not find a way back into the game despite a series of chances and a major penalty shout in injury time. The defeat means we must go to Old Trafford next Tuesday and win, though that is a feat we achieved last season in the league, and is not beyond us once more.

On the night United had goalkeeper Edwin van der Sar to thank for their advantage, the goalkeeper making save after save, in particular from Didier Drogba and Fernando Torres in either half, and when he was beaten Drogba hit the post and Frank Lampard saw his shot cleared off the line, but the main talking point will be the failure of the referee to award Chelsea a penalty after 91 minutes. Full Report

manutd.com – It’s advantage United at half-time in the all-English Champions League quarter-final, thanks to Wayne Rooney’s second opening goal in two missions on Chelsea’s manor and a sterling rearguard action. While the Reds won’t be as comfortable as Real Madrid (4-0), Schalke (5-2) and Barcelona (5-1) heading into next week’s second legs, Sir Alex Ferguson’s men will still be favourites to reach the semi-finals after this psychologically significant win at Stamford Bridge. It was United’s first victory in Chelsea’s backyard since April 2002 when Rooney was a sixteen year-old still awaiting his senior Everton debut and the Reds were chasing, ultimately in vain, a fourth successive league title.

Rio Ferdinand – United’s major signing in that same year, 2002 – returned to the Reds’ line-up for his first appearance since 1 February and made a confident start, beating the diving Fernando Torres to a low ball in from the right. The same Chelsea striker buzzed around the United area in the early stages but his only shot on target was straight at Edwin van der Sar, also back in action after missing West Ham. More Wayne Rooney headlines flashed in front of our eyes momentarily when he collapsed in pain in the third minute, after Michael Essien’s raised studs caught the Reds forward on the top of the foot. Fortunately Rooney recovered, while his Ghanaian assailant escaped a caution. Full Report