Chelsea swept aside as United target another Final

How can anyone possibly select the most influential Manchester United player after a performance like this? There was not a single weak link in the entire 90 minutes.

How can anyone possibly select the most influential Manchester United player after a performance like this? There was not a single weak link in the entire 90 minutes. Edwin van der Sar showed yet again why even at the age of 40, his intended retirement should be the last thing on his mind. Others who even United fans have been critical of in the past were superb. John O’Sheas delightful reverse pass enabled Ryan Giggs to set up the opening goal for Chicharito and Ji Sung Park must have been close to being man of the match, his high energy display rewarded with a winner which was just as clinical as Didier Drogba’s equaliser. Then there was Michael Carricks composure in midfield to continue his resurgent form in recent weeks.

And can any more be said about Javier Hernandez? I have no hesitation in confessing that Ditimar Berbatov has been one of my favourite players from the first day he came to Old Trafford but even I have to  admit that Chicharito’s demotion of Berba to the bench cannot be begrudged. The boy is an absolute goal machine who can almost guarantee United a goal a game. Next challenge is now Manchester City in the FA Cup semi final which I’m confident will prove to be the first of three Wembley visits before the end of May. 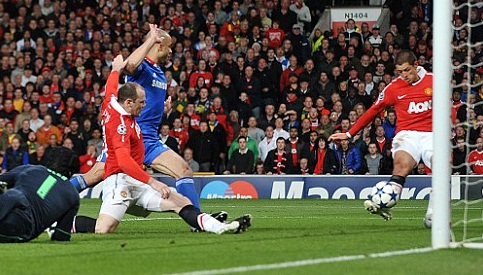 The Telegraph – Manchester United’s glorious obsession with the Champions League proved far stronger than Chelsea’s on Tuesday night. The Treble remains on for Sir Alex Ferguson. Trouble is all that lies in store for Carlo Ancelotti. Worryingly for the Chelsea coach, Roman Abramovich left before the final whistle as the Stretford End caustically serenaded Ancelotti with a chant of “you’re getting sacked in the morning”. Probably the summer.

The Italian’s tactics backfired, confirmed when Fernando Torres was humiliatingly withdrawn at the break, but really it was the hunger of the United players that counted most. Ryan Giggs was magnificent, Wayne Rooney was outstanding. Both combined to help Javier Hernandez score in the first half; although Torres’ replacement, Didier Drogba, equalised on the night, Ji-sung Park ensured a 3-1 aggregate win. Full Report

The Independent – Carlo Ancelotti’s mighty gamble on £50million man Fernando Torres backfired as Chelsea crashed out of the Champions League at Manchester United to place a massive question mark over his future as Blues boss. As Sir Alex Ferguson has noted, Roman Abramovich is obsessed by winning this competition.

As the Russian was in the directors’ box, looking down as United emerged triumphant, Javier Hernandez and Park Ji-sung finding the net either side of half-time, it can only be concluded he is not a happy man. And with Ancelotti insisting he is under no pressure to play Torres, who began tonight’s game but was replaced at half-time by Didier Drogba, the only conclusion to be reached is that he will carry the can for what was so obviously a gross selection error Full Report

Manchester Evening News – Javier Hernandez and Ji-sung Park scored as Manchester United roared into the Champions League semi-final at the expense of 10-man Chelsea. Leading 1-0 from the first leg, United looked to be cruising when Ryan Giggs set up Hernandez for a close-range finish just before half time. Chelsea’s task became even greater when Ramires was sent off after 70 minutes for a second bookable offence, but substitute Didier Drogba pulled a goal back to give Chelsea hope.

United responded almost immediately, with Giggs again the provider, this time for Park who finished well with his left foot. United will now play the winner of the Inter Milan v Schalke tie. The German side are heavy favourites as they go into Wednesday’s game with a 5-2 advantage Full Report

Could you decide who was Uniteds Man of the Match against Chelsea?