City is to Scholes what Liverpool was to Neville

“You hate losing against anybody, but City? It’s bad, painful. I remember losing 3-1 at Maine Road and it was horrible. We probably won’t hear the last of it if we lose on Saturday especially if they go on to win the Cup. It’s an FA Cup semi final at Wembley. It’s massive. It’s the biggest game we’ve had against City for a while. Whoever loses will be devastated.”

Recently retired Gary Neville never tried to hide the fact that he hated losing to bitter rivals Liverpool more than anyone else in his near 20 year career at Old Trafford. Fellow veteran Paul Scholes feels the same way about Manchester City admitting that “You hate losing against anybody, but City? It’s bad, painful. I remember losing 3-1 at Maine Road and it was horrible. We probably won’t hear the last of it if we lose on Saturday especially if they go on to win the Cup. It’s an FA Cup semi final at Wembley. It’s massive. It’s the biggest game we’ve had against City for a while. Whoever loses will be devastated.”

The 36 year old Manchester United midfield maestro went on to explain that “When they’re fourth or fifth, or wherever they are in the League, I don’t think they can be classed as a main rival. Our main rivals are obviously Arsenal and Chelsea. I think City are just a rival because of where they are – Liverpool are the same. Are they more of a threat? Probably, because of the money they’ve spent on players. They have gone up a level and it’s probably made us concentrate a little bit more than we normally would.” 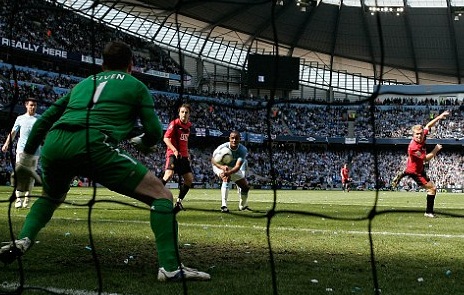 Derbies are nothing new to Scholes who concedes that they’ve changed in recent years “because they haven’t been as big a club as us, it’s the underdog thing in that there’s never been much pressure on them going into derby games. It was a no win game for us. We were going into derbies expecting them to win them. It didn’t always pan out that way, but since them coming into money, it gives a bit more of an edge.”

“They’ll obviously be p****d off that they’ve only managed to beat us once” before quickly adding “and that was a first leg. We’ve nicked the games in the last minutes.”

Scholes himself grabbed a last minute winner at Eastlands last season which remains uppermost in his memory “It was perfect” he recalls “it was a major highlight of my career, one of the best things I’ve ever done. To score in a Manchester derby is brilliant anyway, but to score a winning goal in the third minute of injury time was special.” The reason for so many late United winners against their neighbours is easy to understand Scholes says “We have a belief that we can beat anybody. I’m not sure City have that.” 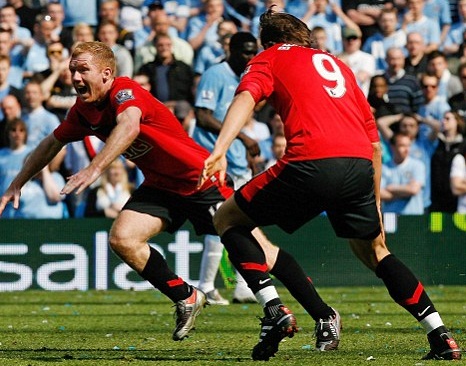 As for the millions that City has splashed out in recent years in a desperate effort to win silverware, the United legend shrugs it off by simply saying “City’s spending isn’t our problem” he responds “Sir Alex is not going to go buying people for £30-40m because they could be inflated prices brought on by City’s spending. Chris Smalling was £10m and he has been a revelation along with Hernandez. They cost relative peanuts.”

Scholes will be 37 in November and there are still doubts as to whether he will continue for another season “I’ve got some huge games to think about right now” he says “I’ll decide from there. But when I finish here, that will be it.”

Saturday’s semi final is a massive occasion for both sides of Manchester but especially for the ginger haired veteran who loves nothing more than to get one over his City rivals. It may even turn out to be his final chance to grab yet another one of those famous last minute winners.

Do you expect this to be the final derby game for Scholes?

Written by Frank Scicluna
United must beat City for Edwin – amongst others
FLASHBACK: Garry Birtles nearly died for a goal