This game was won and lost when Dimitar Berbatov wasted two golden opportunities within 60 seconds in the opening quarter hour then Michael Carrick was inexplicably caught in possession after 52 minutes allowing Yaya Toure to fire home what proved to be the winner. Any hopes of another one of Uniteds renowned comebacks were dashed by Paul Scholes being correctly red carded with 20 minutes remaining for a reckless, studs up challenge on Pablo Zabaleta. For all intents and purpose, it was game over

So the treble dream is over. Manchester City got a deserved rare win over United to clinch an FA Cup Final berth giving them an opportunity of ending their long, 35 year trophy drought. But the wait is far from over yet as either Bolton or Stoke will have plenty to say about the matter. This game was won and lost when Dimitar Berbatov wasted two golden opportunities within 60 seconds in the opening quarter hour then Michael Carrick was inexplicably caught in possession after 52 minutes allowing Yaya Toure to fire home what proved to be the winner.

Hopes of another one of Uniteds renowned comebacks were dashed by Paul Scholes being correctly red carded with 20 minutes remaining for a reckless, studs up challenge on Pablo Zabaleta. For all intents and purpose, it was game over. Being defeated by cross city rivals is never pleasant, especially in an FA Cup semi final but United can now completely focus on what they crave above all else – a record title win and a place in the Champions League final. 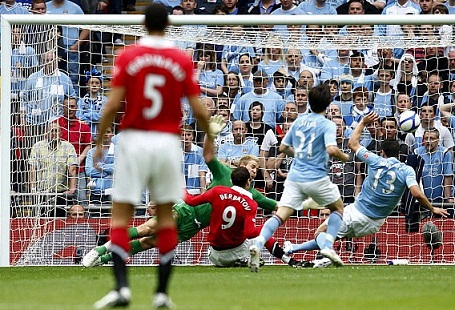 The Telegraph – The balance of power does not change overnight but when Manchester City look back on this game it will be a landmark result in the ambitious development of the club. A first Wembley final since 1981 now awaits and Roberto Mancini has an outstanding opportunity to win silverware in his first full season. But most importantly for the City supporter, it came at the expense of their great rivals, the team that has dominated their city for the last two decades. The ticker banner at Old Trafford, which counts City’s barren years, might finally have to be rolled up.

United certainly helped City on their way. Dimitar Berbatov missed a simple chance to take the lead in the first half, Michael Carrick gifted Yaya Toure the ball for the winner and Paul Scholes undermined an attempted fight back by getting sent off for a reckless challenge on Pablo Zabaleta Full Report

The Guardian – Whatever now happens in the FA Cup and whatever the banner at Old Trafford may say it is not quite true to suggest Manchester City have not won anything for the past 35 years. They won their biggest match of the season here and, although their conquered neighbours will be reluctant to admit it, one of Manchester United’s biggest matches of the season too.

They denied United a treble, and while that may not quite count as knocking them off their perch, it is a beginning. It would be typical of City to go and lose to either Bolton or Stoke in the final now, yet they will always have this happy memory. It was a match they had to win to retain any sort of local pride, not to mention wider credibility after all the money that has been spent, and in the end they won it surprisingly convincingly. Ryan Giggs never started in the game and Paul Scholes did not finish it, but this was emphatically City’s day, not a reprise of 1999 Full Report

Manchester Evening News – Ten man Manchester United crashed out of the FA Cup and saw their Treble dream shattered by Manchester City at Wembley. The game was evenly contested in the first-half, but City grabbed the initiative after the break, with Yaya Toure capitalising on Michael Carrick’s mistake to finish past Edwin van der Sar after 52 minutes. Paul Scholes was sent off for a high challenge on Pablo Zabaleta after 71 minutes, and City held on to go through to the final.

It could all have been very different for the Reds had Dimitar Berbatov not passed up two fine early chances. First he was through one-on-one with Blues goalkeeper Joe Hart after a sharp one touch move involving Scholes and ji-sung Park, but the City stopper spread himself superbly to block the shot. Moments later Nani crossed a dangerous ball in, but the Bulgarian striker somehow lifted the ball over the crossbar from a couple of yards out Full Report

Written by Frank Scicluna
Book Review: Go away if you hate the Glazers
Stockport bids farewell to Manchester City