Daniel Harris is one of the huge number of Manchester United fans who wants to see the hated Glazers out of the club so he chooses to boycott Old Trafford and only follow United away from home. ‘ On the Road: A Journey Through a Season’ is a match by match account of a different kind. The authors opinions and humour leap out to guarantee that every page entertains and stimulates. You probably won’t always agree with Harris but you will respect his arguments and enjoy what he has to say. This is simply a story of the 2009-10 season from a fans perspective.

It’s a brilliant piece of writing which goes way beyond a mere account of a football season. The pieces gel together into a kaleidoscope of insight with lots of laugh out loud moments. Perhaps its greatest asset is the unique language of the author – he creates new phrases and images which will possibly stick in the vernacular for many years to come. 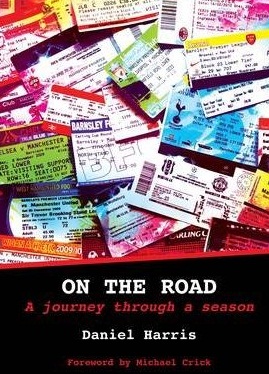 This is the voice of a real supporter. Critical, maybe frustrated but ultimately on the side of the club he loves. This book is the authentic voice from the terraces but as with all significant literature, it goes beyond its apparent context. Seemingly about Manchester United, it’s also about football in the raw. But it’s not just a football book because whoever said that football is a metaphor for life must have had this book in mind.

Harris captures the emotional roller coaster of following a football team perfectly – the delirium of a last minute win, the despair of a late loss and the occasional hilarity of a match where the outcome plays second fiddle to the events which surround it. Great writing and a passion and knowledge of the game shine through.

There are thousands of football fans who have talked of doing exactly what Harris has done over many a pint in many an English town. If you’re one of them, you should have no hesitation in saluting him.

The final word must go to a rival Liverpool supporter who’s impressed enough to confess that “Harris finds the pathos and spots the harrowing or hilarious details. As a Liverpool fan, I can’t say I like his blog but I can tell it is perceptive and keenly felt.” Alyson Rudd, editor of The Times Book Club and sportswriter with The Times.

Is boycotting Old Trafford matches the best way to support your club?