Manchester United travel to Newcastle just three days after hopes of another treble was snuffed out at Wembley but when the ‘impossible dream’ was achieved in 1999, it was the same Toon who provided one of the last hurdles for United. The FA Cup Final was the second of the three trophies which had to be won in order to keep the dream alive, leaving only Big Ears needing to be lifted in Barcelona four days later. As Mark Bradley from PA Sport reported at the time “Their night of destiny now awaits them in the Nou Camp but for the time being United can celebrate their third Double of the 1990s” 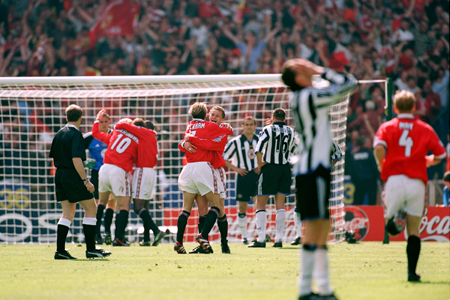 Manchester United proved that it will take far more than even the absence of the influential Roy Keane to come between them and the Treble as they contemptuously swept aside Newcastle in the FA Cup final. As Keane limped off injured after just eight minutes at Wembley, United were left to stare into the void which they must confront in the Nou Camp next week against Bayern Munich due to suspension – life without their captain.

But within 96 seconds of  Teddy Sheringham’s arrival as Keane’s replacement, the former Tottenham striker had given his side a lead which they never once looked in danger of surrendering. While Sheringham was simply magnificent in attack throughout, David Beckham filled in almost seamlessly for Keane in central midfield while Ronny Johnsen was pushed forward into the role towards the end.

Even though United will also have to cope in Barcelona without Paul Scholes, who scored their second goal against Newcastle after 51 minutes, manager Alex Ferguson can rest assured that he has a whole range of convincing midfield options to choose from. For the incredible strength of United’s squad was proved not only by their ability to cope without Keane but by their ability to leave £26million of summer signings – Dwight Yorke, Jaap Stam and Jesper Blomqvist – on the bench at the start.

Their night of destiny now awaits them in the Nou Camp but for the time being they can celebrate their third Double of the 1990s. The loss of Keane did appear to have given Newcastle an early edge as the Irishman, who had produced two shuddering early tackles himself, fell victim to a perfectly fair challenge by Gary Speed. Within two minutes of his arrival Sheringham played a textbook one two with Andy Cole before guiding his shot past the stranded Steve Harper in the Newcastle goal.

Sheringham and Solskjaer just failed to meet crosses, Beckham – fiercely competitive in his new role – drove wide and then Cole lobbed Harper only for Nikos Dabizas to recover and hook clear off the goal-line. The only glimmer of hope for Ruud Gullit’s side came towards the end of the first half as United took their foot off the pedal and Dietmar Hamann strode forward to let fly with a shot that Peter Schmeichel did superbly to push around the post.

It was the German’s final meaningful contribution of the game as he was the surprise fall-guy at the break as Newcastle threw on Duncan Ferguson even though the giant centre-forward is supposedly only half fit. David May and Ronny Johnsen suddenly looked to have a battle on their hands, or rather heads, but Newcastle’s renewed hopes lasted all of eight minutes before they committed defensive suicide.

Dabizas was the culprit when instead of finding row Z in the stands when he was pressured by Ryan Giggs near the corner flag, he was hurried into a weak clearance which allowed Solskjaer to intercept. The Norwegian immediately found Sheringham, who laid the ball into the path of Scholes and the England midfielder, who scored a hat-trick against Poland on his last visit to Wembley, struck a firm left-footed shot into the net.

That was effectively game over and the two goal advantage allowed Ferguson to replace Cole with Yorke, who was just unable to keep his header down when he met a cross from Giggs shortly afterwards. From then it turned into a master-class of attacking football as Manchester United surged forward at every opportunity to decimate a stretched Newcastle defence.

Substitute Silvio Maric did waste a glorious chance with seven minutes left as he shot wide when clean through, but to be fair Manchester United had by then settled into the comfort zone. After all, they have a far tougher test ahead of them next week when history awaits in the Nou Camp. Two down – one to go.

3 thoughts on “FLASHBACK 1999: When Toon was a Treble victim”