In an interview prior to the Champions League first leg semi final tie with Germany’s Schalke 04, Manchester United manager Sir Alex Ferguson revealed why he failed to make a determined attempt to sign veteran Raul when the 32 year old striker finished his glittering 16 year career with Real Madrid at the end of last season. “He simply became available at the wrong time, if we did not already have Michael Owen at the club we may have been very tempted”

“His time at Real had come to an end after a fantastic career but players like that always find something in terms of ambition, they don’t just wither away and at his age he had plenty to do, plenty to offer. It would have been a Henrik Larsson type signing.” 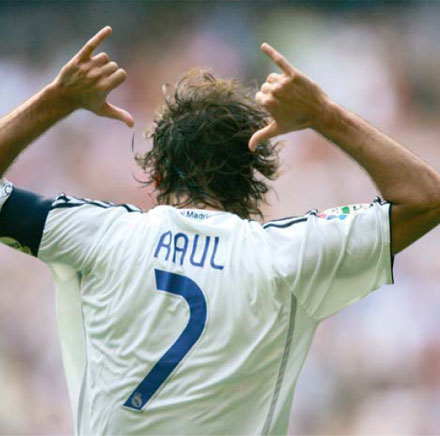 Sir Alex continued to say that “You get opportunities with experience like that like we did with Michael Owen and Michael Owen has been a fantastic professional here. They bring value to the team, bring experience and I think if I didn’t have Michael Owen I might have been tempted.”

Raul will instead be a major threat for United as the two clubs battle for a place in the Champions League Final. “Raul is Raul’ Ferguson warned “and you’ve got to be careful in the last third of the field because he’s still got the intelligence and a fantastic goal record. It’s 71 in the Champions League? Bloody hell, I hope it stays that way for the next three weeks.”

Ferguson admitted to “Always being apprehensive at this stage of the competition “we’ve had the same situation over the years, when we played Juventus in the 1998-99 campaign. There was apprehension in the first game at home (1-1) but we released that in the second leg (3-2). It was the same with Barcelona in 2007-08” he remembers “we got the result we wanted at home (1-0) but the last few minutes were agony. You run the full gamut of emotion in Champions League semi finals because it’s never easy.”

“There is no way Manchester United will be led into believing this is going to be easy. Schalke have beaten every team at home in the Champions League this season  including Valencia and Inter Milan. If you just take that in isolation, it is good form. This is going to be a difficult game and we will treat it that way.”

Would Raul have been suited to the Premier League?