Truly Reds has refrained from quoting other Manchester United websites in the past because their opinions should always remain exclusive. We have come across a particular one however which should be shared with every other United fan. In our opinion, ANYONE who wears the famous red shirt should be respected yet young midfielder Darron Gibson has been anything but in the last 24 hours.

Truly Reds has refrained from quoting other Manchester United websites in the past because their opinions should always remain exclusive. We have come across a particular one however which should be shared with every other United fan. In our opinion, ANYONE who wears the famous red shirt should be respected yet young midfielder Darron Gibson has been anything but in the last 24 hours. One absolute idiot – a ‘supposedly’ United fan, wrote that “Gibson is the “biggest waste of space ever” and an “abysmal excuse for a footballer” on a Twitter account that Gibson had every right to open. Is anyone surprised that the account was closed within 20 minutes by the young Irish international?

As one of the more enlightened readers commented “Why people feel the need to insult him I don’t know, it’s the manager who picks him. He isn’t all that terrible, could have a starting place at most Premiership sides.” That’s the sort of reasoning which makes a lot of sense so when an article by freelance journalist Annie Eaves appeared on the ManUtd 92 blog we thought that it should be exposed to our readers as well. Eaves wrote “Darron Gibson eh? Gibbo. What a bloke. He had a dream and worked hard and accomplished it. He may not be the most talented footballer but he made it at Manchester United. He managed to be a part of a squad and did what was asked and became useful to the manager as the club approached a record breaking nineteen titles. A dream comes true. A reality made from aspiration. A boy done good. 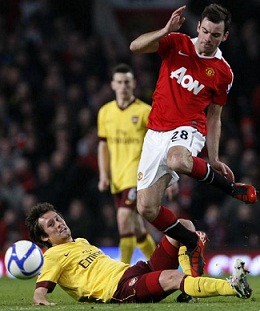 You see, Darron Gibson has the temerity to be a player for United, something you failed by a mile and half the world. He’s the worst player to pull on that shirt you claim to support, the worst you’ve ever seen. He wouldn’t make it in the Championship. He steals a living. He’s a fraud.

Obviously the majority of players who have played for our great club throughout history are a class apart from the rest. We always have the best players. Yeah you may think of names from decades gone by but obviously they count for little. Our team is of this age. Unfortunately much of our support is too.

There’s a different aspect to this. A religious and nationalistic aspect. An aspect that as a Mancunian I couldn’t give two hoots about. So he doesn’t play for Northern Ireland, and? So he chooses to play for the Republic, and? To be honest I couldn’t give a camel’s whisker whether he played for The Cook Islands.

You want to use him as some pariah to feed age’s old hate or new anger? I couldn’t care less. You want to support my local team then you’re very very welcome but bring your problems with that and let them affect your support then I feel you’d be better off in Glasgow. And Glasgow would be worse off for having you. Darron Gibson isn’t ever going to be Xavi, let’s hire the firing squad for a convenient time next week.

Or, alternatively, let’s get behind the boy as he fulfils his dream. If our manager feels he is right for the team then you have to accept that on that particular day. Explode with frustration if you like and criticise performances. If you feel you have a burning rage then perhaps look at other issues surrounding yourself rather than Darron Gibson, the young footballer.

The idiots, and frankly that’s what the anonymous keyboard warriors are, who attacked him today for daring to open a Twitter account, have probably defined the concept of being pathetic. Don’t rate the player? Fine. Want him sold? Fine. Attack the guy anonymously with cowardly threats? Fine?

Not fine anymore. Just understand it says more about you than it ever will about Gibson. Unfortunately as a club we have a section of support always trying to prove something to an often inexistent peer group. United better than England. Carrick worse than awful. Gibson deserving of hate.

It’s about time we stood up against these idiots. Our club is Manchester United and long may it remain that way. We don’t have to agree all the time, God forbid we ever do. However we do have to understand what the concept of support means.”

There’s not much more that can be added is there? Well said Annie, every United ‘fan’ please take note.