Pogba may be the answer…and other gossip

Transfer rumours are a dime a dozen. Very few have genuine substance so they should always be taken with a huge amount of cynicism. Yet they cannot be completely ignored in case there’s the slightest grain of truth in them. Some media outlets are obviously more reliable than others so Truly Reds is prepared to report the gossip and give a rating of 1 to 5 as to how believable it’s likely be.

Transfer rumours are a dime a dozen. Very few have genuine substance so they should always be taken with a huge amount of cynicism. Yet they cannot be completely ignored in case there’s the slightest grain of truth in them. Some media outlets are obviously more reliable than others so Truly Reds is prepared to report the gossip and give a rating of 1 to 5 as to how believable it’s likely be. A rating of 1 can almost certainly be dismissed out of hand while a 5 may give the story some creedance. Have a look at the latest sports news and transfers being reported but be warned – only believe what you want.

An Owen Hargreaves replacement is being lined up according to sportsvibe.co.uk. United could be in line to snap up want away Real Madrid midfielder Lassana Diarra with the Frenchman’s future at the Santiago Bernabeu cast into doubt after Jose Mourinho agreed a deal for Borussia Dortmund youngster Nuri Sahin. The former Chelsea and Arsenal player has attracted the attention of a number of clubs, with Tottenham Hotspur believed to be rivalling United for his signature. 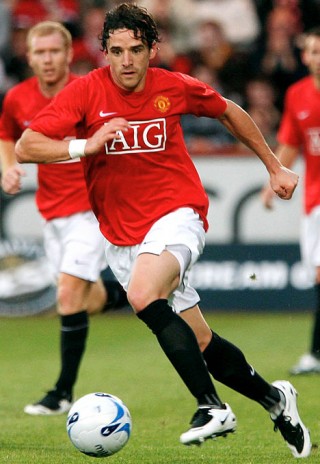 United are thought to be in pole position to sign the French international and are putting together a bid in the region of £12-14 million as Sir Alex Ferguson looks to find a replacement for the injury prone Hargreaves. But here’s a warning. Do not under estimate the super talented Paul Pogba as he waits in the wings. Remember that Duncan Edwards was only 17 years old when he took English football by storm! Rated – 2

And here’s another. Sir Alex Ferguson is reportedly closing in on signing his long term replacement for Owen Hargreaves, with Standard Liege youngster Axel Witsel ready to make a Premier League switch after five years at his current club, according to talkSport. Witsel, who once received an eight match ban for a nasty tackle that broke an opposition players ankle, is said to have the combative qualities that the likes of Michael Carrick and Paul Scholes lack.

Ferguson deems him a long term replacement for Hargreaves who has been plagued with injury since arriving at Old Trafford from Bayern Munich in 2007. Rated – 2

Chief United scout Martin Ferguson has made regular checks on Daniele De Rossi since the New Year, while Manchester City scout Barry Hunt has also been watching the midfielder. With just over a year to run on his existing Roma deal, Gazzetta dello Sport says De Rossi is not close to agreeing new terms.

Roma will be reluctant to allow De Rossi to wind down his contract and is prepared to sell. A deal for less than £14 million could be on for United given De Rossi’s contract situation. Interestingly, new Roma sports director Walter Sabatini was in Manchester on the weekend. Rated – 2

Manchester United goalkeeper Tomasz Kuszczak could be on the verge of leaving the club after being frozen out at Old Trafford, according to The Mail. The Polish stopped has played second fiddle to Edwin Van der Sar since the Dutchman made the move to the 18-league champions in 2005. But West Bromwich Albion and Wigan Athletic are reportedly interested in signing the United keeper Rated – 4

Meanwhile, a deal has been ‘agreed’ with Athletico Madrid for the services of promising Spanish goalkeeper David de Gea, according to an exclusive talkSport interview with Gerry Armstrong. The Spanish football specialist has revealed that the youngster will be between the sticks at Old Trafford next year, should he agree personal terms. “Six or seven weeks ago Man United agreed a fee with Atletico Madrid” Armstrong told talkSport’s ‘Keys and Gray Show’.

“Everything is all in place, they’re just waiting for him to sign. But he has a question mark about the move. He’s a young goalie, only 20, and he’s wondering whether or not he wants to come to England now, or whether he should wait. In the next two or three weeks it will all happen.” There has to be a huge question mark over any player who is not 100% desperate for such a move. Rated – 2

Ligue 1 defender Raphael Varane has reportedly been contacted by Manchester United and is considering a move to Old Trafford over interest from Arsenal and Bayern Munich. Sir Alex Ferguson reportedly sees the 18 year old as perfect to develop at United after the wonderkid starred for French side Lens in his debut season. “There’s no promises from Manchester United.

There has been contact from United’s side but also from other clubs” Varane said as reported by the Daily Mirror, hinting at the interest from Arsenal. “I do like the Premier League but there’s also interest from Spain and Germany. I don’t like one competition in particular.” Rated – 3

How many signings does Ferguson NEED to make in summer?

Written by Frank Scicluna
14 comments
Media Watch May 12: Sir Alex is now beyond Busby
Valencia credits daughter for his comeback