Antonio Valencia is looking forward to the day he can raise his arm to his daughter again – but this time with the Premier League trophy in his hand. The last time he did it was to reassure little five year old Domenica as he was carried off on a stretcher in agony at Old Trafford. It was on September 14 last year when Valencia fell awkwardly following a challenge from Rangers’ Kirk Broadfoot suffering  a broken and dislocated left ankle. Now, eight months later, he’s on the brink of a Premier and Champions League double with Manchester United.

Winger Valencia, 25, said “I wasn’t signalling to the crowd with that gesture. I raised my hand because my daughter’s name, Domenica, is tattooed on it and she was at the game, so I wanted to show her I was going to be OK. That’s the reason I did it. It was obviously a very sad night for me and at that moment I could think of nothing but the pain. I just wanted it to go away” he said. 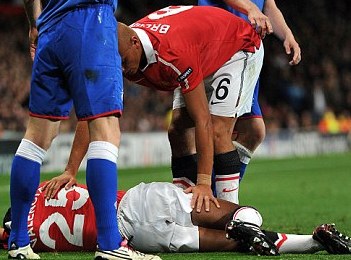 “I remember just lying there waiting for the doctor to tell me what was going to happen. I didn’t feel sick or dizzy because I was given oxygen straight away and then an injection. After that the pain started to subside a little. I was determined that my daughter would see me playing again and I kept that thought in my mind all along. I also spoke to the club’s chaplain, John Boyers, a few times and his kind words gave me more inspiration.”

Valencia, who joined United for £16million from Wigan in June 2009, added “To lift the title for the first time would be the perfect way for me to cap my recovery from injury. It is something I set my sights on. At first I thought my speed might decrease permanently but I spoke to the physio and he assured me I was going to make a complete recovery, which gave me a lot of confidence”

His first tentative steps back to fitness came as a sub against Arsenal on March 12th. Valencia told Inside United magazine “The reception from my team-mates and the fans as I arrived on the pitch was wonderful and gave me extra motivation. It was the kind of moment I’d thought about during my rehabilitation.”

It took Valencia time to regain the confidence to play with the freedom and determination that had won over the fans following his arrival from Wigan. “After an injury like that I suppose that’s natural. When I played against Marseille in the Champions League on March 15, I went in for a tackle and it was at the back of my mind, so I was a little bit tentative. But once you start to warm up and look at the players’ faces, the adrenalin kicks in and you don’t think much about it.”

Valencia is back with a vengeance with his form relegating Nani to the bench. He is even better than before his injury with surging runs down the right and goals against Fulham and Schalke. And the wideman is now certain to start in the Champions League final with Barcelona at Wembley on May 28.

“When I was injured I would sit at home watching the matches and think ‘If I were in that position, I’d do this or that’. Previously, the longest I’d been out was about three months and this was more than five months, so it was tough. But now I’m back at nearly 100 per cent and I’m happy to be involved in these big games.”

“Training with the lads and playing at an exciting time of the season – it doesn’t get any better than that. Football is my whole life and perhaps I didn’t really appreciate that before the injury, or even while I was out. Now I enjoy every training session and every match.”

For the man who once rejected Real Madrid because he was happy at Wigan, there are just three of those matches left this season. A point at Blackburn on Saturday will confirm United as champions for a record-breaking 19th time. And then on the final day Blackpool visit Old Trafford when Valencia can raise the trophy towards Domenica. Something he will hope to repeat at Wembley with the European Cup six days later.

Did anyone expect Valencia to get back to his best before next season?