Nemanja Vidic is a point away from hoisting his first trophy as Manchester United captain – and he thanks the Reds’ critics for creating the platform for the achievement. The 30-year-old Serb has also warned rivals of the champions-elect that Sir Alex Ferguson’s much-maligned new generation of players will get even better next season. In Fergie’s era as Old Trafford boss, only Gary Neville in November 2005 walked into a skipper’s job facing a more daunting task in the aftermath of Roy Keane’s controversial exit, Neville took possession of the armband in a time of transition and turmoil.

Last August, Vidic was officially named as the new captain with Fergie citing his appearance record as the reason for the appointment above Rio Ferdinand. Vidic’s new assignment was made public days after Ferguson had learnt privately of Wayne Rooney’s stunning news that he didn’t want to sign a new Old Trafford contract. When that became public knowledge, United were also dodging incoming flak from fans and critics alike as they stumbled along in the autumn. 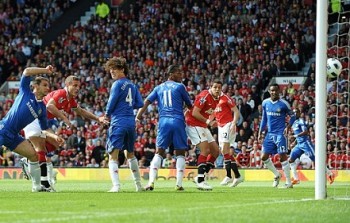 Supporters and observers were also questioning that the modest £25m summer outlay to acquire Javier Hernandez, Chris Smalling and Bebe was not enough to regain the Premier League title from Chelsea and have an impact in Europe. Fergie and the Glazers were held responsible to varying degrees for not doing what was perceived as essential refurbishment on the squad.

Rooney’s contract saga also had the squad quality at its root. There was an atmosphere of simmering discontent but Vidic took the blows on the chin and his leadership helped the Reds absorb the punishment. The £8m buy from Spartak Moscow in 2006 cites the tough appraisals as the fuel that fired the bid for a record-breaking 19th title and a place at Wembley in the Champions League final against Barcelona.

“Complements are not always good for you, criticism can help a team” Vidic told  Stuart Mathieson of the Manchester Evening News just a few hours before the trip to Ewood Park where the race for the Premier League may reach its climax. “Back in early season there were people who were always trying to compare this team to other United teams. They were saying that we didn’t have the individuals like we used to and we were not as good.” he remembers “but you look at the names in this team and you think ‘how could they say that?’ I couldn’t agree with all that was going on then.

“We have never been focused on what people have been saying about us but you can still get benefits from it. It can be a positive. Sometimes criticism can help a side. It can drag you forward. You have to work harder to prove to your critics that anything they are saying is not true. That it is different to their opinions. It pushes you to work harder.”

“If you are getting complements then that can have the opposite effect. It can relax you. You start believing what people are saying about you and you are not on top of your game. We have become better as a result of all the words that were said about us. We always had enormous belief and we’ve worked hard together defensively and in attack. It is all done as a team. If we win the title we will have proved to everyone that we are a very good team. We are nearly there now to prove them wrong. A big part of the job is done but it’s not finished. We still have to perform at Blackburn.”

Vidic does not need any reminding that Ewood Park was where United surrendered their crown last term. Coming in the wake of their Champions League defeat to Bayern Munich, a goalless draw turned the United dressing room into a morgue. The difference could not be more marked if United were to match that result this time around, confirming, as it would, a record 19th league championship. Not that Vidic has any intention of settling for such a result.

“A draw would be enough but Manchester United do not play like that” he said “we always try to win and Saturday will be no different. We know Blackburn are a good side on their own ground.” The big defender made it clear that he will only allow his side to start their title party when he knows it is impossible for Chelsea to wreck it.

Would Vidic have been voted Player of the Year this season if he was British?