The Manchester United 1878-2010: The Full Story and Complete Record gives a timely, in depth look at how a humble club which started as Newton Heath Cricket and Football club has become one of football’s giants, rated the wealthiest club in the world

As Manchester United clinched its record breaking nineteenth title at Ewood Park on Saturday, it officially became the most successful club in the history of domestic English football. Winning the most League titles and the largest number of FA Cup victories, the Manchester United 1878-2010: The Full Story and Complete Record gives a timely, in depth look at how a humble club which started as Newton Heath Cricket and Football club has become one of football’s giants, rated the wealthiest club in the world. It’s a 352 page hardcover book printed by Simon & Schuster in 2010

When the Lancashire and Yorkshire Railway Company formed the Newton Heath L and YR Cricket and Football Club in 1878, they could have had no idea what it was they were starting. Renamed Manchester United in 1902 after financial problems, the new club would soon go on to win the league title and the FA Cup. It was just the beginning of one of the most remarkable and gripping stories in sport. In Alex Murphy’s masterful account, he explains how United rose to success, and how the club recovered in the bomb-damaged aftermath of the Second World War under the brilliant guidance of Matt Busby. 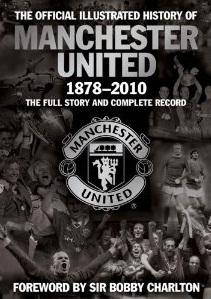 The loss of the core of the side in the Munich Air Disaster of February 1958 stunned a nation, and football fans around the world. But Busby recovered to build a new side around the talents of Best, Law and Charlton, becoming the first English side to win the European Cup in 1968.

More recently, United have dominated English football under manager Sir Alex Ferguson, winning an incredible 11 Premier League titles, including a unique Treble in 1999. The incredible story of the Reds’ success, the great stars from Billy Meredith over 100 years ago to Ferdinand, Giggs and Rooney today, are all featured in this essential volume. Packed with stunning photographs and all the facts and figures you could ever want to know, this is a book no United fan can afford to be without.

With a foreword by Sir Bobby Charlton, reviewers generous comments included “A big book filled with all of United’s history, a great purchase – quality pictures – lots of information and a big smile on my face” and “Spotted this before Christmas and had to get it for my son who is football mad and a huge United fan. He was over the moon. It’s full of great information on the history of the team plus lots of great pics. Would definitely recommend to any fans out there who enjoy a bit of a read!”

Written by Frank Scicluna
Flashback 1991: The floodgates opened for United
What To Do With The 35 Year Banner?