Sir Alex Ferguson admits the European Cup Winners’ Cup unexpected victory against Barcelona 20 years ago was a major step in the club’s development under his control. That famous night in Rotterdam in 1991 saw Manchester United overcome the odds to beat Johan Cruyff’s strong favourites 2-1 and there are echoes of a similar situation at Wembley in this season’s Champions League final.

After winning a first trophy thanks to the FA Cup the previous May, the European triumph was a key factor in continuing the momentum that would propel United to an unparalleled spell of domestic dominance and two Champions League trophies on foreign soil. 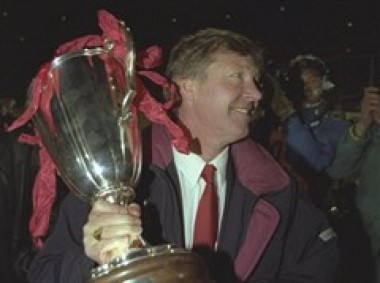 “It was a major step forward” Sir Alex replied to Inside United when asked about the significance of the Cup Winners’ Cup success.

“There’s no doubt about that. Lee Sharpe was coming through and so was Giggsy. We had Mark Hughes, Brian McClair, Paul Ince and Bryan Robson then soon after, we bought Paul Parker, Andrei Kanchelskis and Peter Schmeichel. Those were fundamental purchases that gave us a really strong group.”

The match itself was something of a battle with Hughes scoring twice against his former club only for United to need to dig deep when Ronald Koeman pulled one back with Clayton Blackmore making a saving clearance towards the end.

With so much focus on the manager’s tactics at Wembley after the 2-0 defeat to Barca in Rome in 2009, he gave an insight into that memorable evening in Holland. “The way Barcelona set up tactically in the final made things very difficult for us in the first half” he recalled.

“They played two wide players and no centre forward and crowded the midfield. Once we got organised at half time we were the better team in the second half and it was a fantastic night for us”