On May 14, 2011, Manchester United became the most successful club in the history of English football by winning it’s nineteenth title! ?Sir Alex Ferguson won 12 of them on his own since 1993. It’s difficult to believe that so much silverware can come to one club in such a short period of time because it has only been in Spain, Scotland and a few other minor leagues that a similar run of success has previously been possible. It’s a stunning feat which is remembered by TalkSport as they explain how he did it.

On May 14, 2011, Manchester United became the most successful club in the history of English football by winning it’s nineteenth title! ?Sir Alex Ferguson won 12 of them on his own since 1993. It’s difficult to believe that so much silverware can come to one club in such a short period of time because it has only been in Spain, Scotland and a few other minor leagues that a similar run of success has previously been possible. It’s a stunning  feat which is remembered by TalkSport as they explain how he did it.

NO.1: 1992/93 – Ferguson bags his first title since joining United in 1986, in the first Premier League season. It’s United’s first championship for 26 years and they clinched it without playing after closest rivals Aston Villa lost to Oldham Athletic while Fergie was on a golf course. Eric Cantona – signed early in the season from Leeds United – is the inspiration behind this first success. 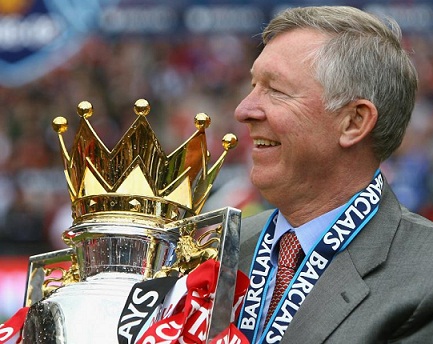 NO.2: 1993/94 – If Fergie’s first Premier League title was a struggle to win, the second is an absolute stroll. With a new record of 92 points from 42 games, Ferguson’s first great team lead virtually from start to finish and add the FA Cup for good measure. The team picks itself: Schmeichel, Irwin, Parker, Bruce, Pallister, Ince, Keane, Kanchelskis, Giggs, Cantona, Hughes.

NO.3: 1995/96 – After the sale of Paul Ince, Andrei Kanchelskis and Mark Hughes, Sir Alex proves the doubters wrong – hello Alan Hansen – when a youthful United side pip Kevin Keegan’s Newcastle United to the title. David Beckham, Nicky Butt, Gary Neville and Paul Scholes emerge to taste title glory for the first time and United win another League and FA Cup double after Eric Cantona comes back from his ban for attacking a fan.

NO.4: 1996/97 – A poor season by United’s standards, conceding 44 goals and winning ‘only’ 75 points, but they still finish top of the pile by seven points. Ole Gunnar Solskjaer emerges as a new goal scoring force, while David Beckham picks up the PFA Young Player Of The Year Award and Eric Cantona quits Old Trafford at the end of the season.

NO.5: 1998/99 – United regain their title, pipping defending champions Arsenal by a single point after a thrilling race for top spot. An incredible season sees Fergie’s side gain the crucial momentum they need when they beat rivals Arsenal in an FA Cup semi-final that paves the way for a treble of Premier League, Champions League and FA Cup. Goalkeeper Peter Schmeichel bows out of Old Trafford on an incredible high, having won five titles in the past seven seasons.

NO.6 1999/2000 – Fresh from the treble season, Manchester United are at their most dominant domestically, topping the table an incredible 18 points clear of second-placed Arsenal. Despite this, Fergie decides that Mark Bosnich isn’t an adequate replacement for Peter Schmeichel and signs French World Cup and Euro 2000-winning keeper Fabien Barthez for the following season.

NO.7 2000/01 – Another title procession for United, who virtually wrap up a seventh Premier League triumph in nine seasons when they beat their nearest challengers Arsenal 6-1 in late February. With their third championship in a row, United join Huddersfield in the 1920s, Arsenal in the 1930s and Liverpool in the 1980s as the only clubs to win three back-to-back.

NO.8 2002/03 – Arguably Fergie’s most unlikely title triumph, Manchester United snatch the Premier League title back from Arsenal. Trailing Arsene Wenger’s team by eight points going into March, a side now containing Rio Ferdinand and Ruud van Nistelrooy go unbeaten after Boxing Day, winning all but three of their remaining games. Arsenal won the Premier League comfortably the season before and would go unbeaten the next season, but Fergie denies them a title hat-trick to prove you can never count him beaten.

NO.9 2006/07 – In the face of Arsenal’s Invincibles and Chelsea’s Special One, some foolish pundits predict that Fergie’s glory days are over. With Wayne Rooney and Cristiano Ronaldo now firmly spearheading the attack, while Edwin Van Der Sar, Rio Ferdinand and Nemanja Vidic provide a formidable defence, United claim the title from Jose Mourinho’s Chelsea and launched another era of Old Trafford success. Ryan Giggs’ ninth title takes him one clear of the individual record previously held by Liverpool’s Alan Hansen and Phil Neal.

NO.10 2007/08 – United again pip Chelsea to the title – now temporarily managed by Avram Grant – with Rooney and Ronaldo supplemented by Carlos Tevez in attack. Ronaldo scores 42 goals in all competitions as Fergie adds another Champions League trophy to his 10th Premier League medal, beating Chelsea to more silverware in an all-English Moscow final.

NO.11 2008/09 – Another hat-trick of titles is secured as Fergie takes United level with Liverpool on 18 championships. It is Liverpool who push United all the way in the Premier League, but despite only losing two games all season and beating their arch rivals 4-1 at Old Trafford, Rafa Benitez’s Reds finish four points behind the champions. Defensive solidity is the key, as Edwin van der Sar goes an incredible 14 games without conceding a goal.

NO.12 2010/11 – Despite criticism that this isn’t a vintage Manchester United team, Fergie is yet again proving the doubters emphatically wrong by leading them to his 12th title and a record-breaking 19th for the club overall. If that’s not vintage, we don’t know what is!

Which was your most memorable title winning season?

Written by Frank Scicluna
What To Do With The 35 Year Banner?
United gives Michael Owen what Liverpool couldn't